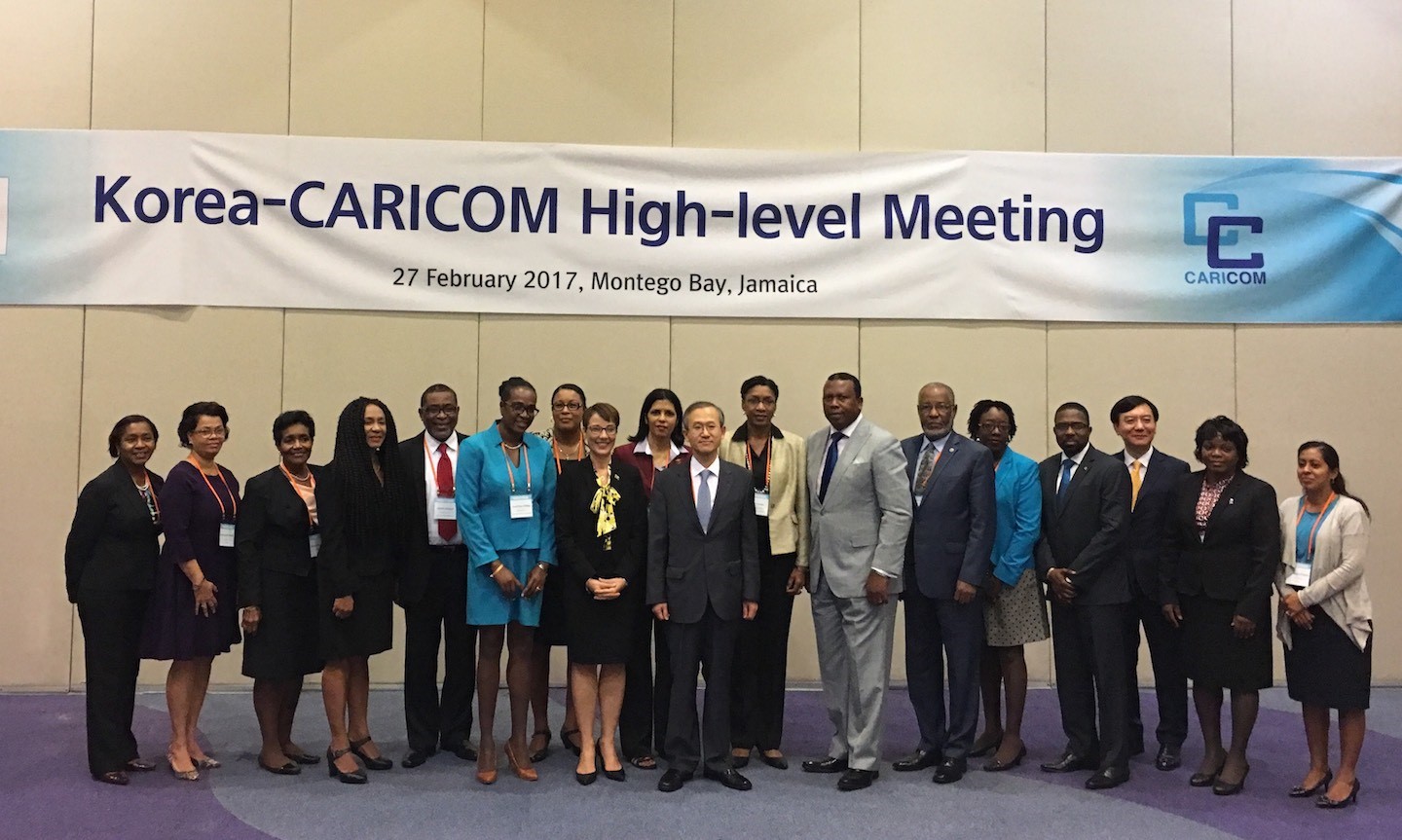 2.         Recognising the convening of the High-Level Meeting as a milestone in Korea-CARICOM relations, the Heads of Delegation reaffirmed the importance of promoting dialogue and cooperation between the two sides, and declared their commitment to further strengthen the existing ties of friendship and spirit of cooperation which they share.

3.         The CARICOM side expressed its appreciation to Korea for its ongoing technical assistance to the Community, including through the Korea International Cooperation Agency (KOICA) Fellowship Programs, the ‘Improving the Structure of Governance in the Caribbean Community’ Project, the CARICOM E-Government Project, and financial support for CARICOM Electoral Observer Missions.

4.         Underscoring the importance of deepening mutual understanding through regular and continued dialogue, the Heads of Delegation acknowledged the role of the annual 'High-Level Forum on Korea-Caribbean Partnership', hosted by Korea, as a useful platform in promoting cooperation between the two sides. The Heads of Delegation also agreed to reinvigorate the Consultation and Cooperation Mechanism between Korea and CARICOM, which was established in 2006 to guide future Korea-CARICOM political and economic relations.

5.         The Heads of Delegation exchanged views on a wide range of issues of mutual interest, including climate change, development cooperation, e-government, the CARICOM Single ICT space, sustainable development, food security, energy security, and regional and international peace and security. They agreed to continue further discussion in these areas with a view to addressing common challenges.

6.         Both sides underscored the complementarity of the five international agreements of the new global development framework adopted in 2014 and 2015: the SAMOA Pathway for Small Island Developing States (SIDS); the Sendai Framework for Disaster Risk Reduction; the Addis Ababa Action Agenda on Financing for Development; the Paris Agreement on Climate Change; and the 2030 Agenda for Sustainable Development.

7.         Both sides also highlighted the importance of the revitalization of a global partnership for the achievement of the 2030 Agenda for Sustainable Development, which puts people at the centre of the development process and focuses on the eradication of extreme poverty.

8.         The Heads of Delegation of the two sides acknowledged the difficulties CARICOM countries face, due to graduation, in the attainment of the Sustainable Development Goals (SDGs) of the 2030 Agenda for Sustainable Development, given their categorization as Middle Income Countries, several of which are highly indebted. In this regard, both sides agreed to seek ways to promote cooperation between Korea and CARICOM for the attainment of the SDGs.

9.         The Heads of Delegation underscored the serious impact of climate change and global warming, especially on SIDS, such as those in the CARICOM region, and committed to work together to enhance capacity-building and knowledge-sharing, while exploring avenues for cooperation on projects aimed at combating climate change and its impacts.

10.       The Heads of Delegation discussed energy security, and noted that despite the availability of domestic renewable energy sources, the CARICOM region remains highly dependent on imported fossil fuel. As such, they further agreed to work together to promote cooperation in the field of sustainable energy.

11.       Stressing the need to promote tangible and mutually beneficial cooperation between Korea and CARICOM in the field of climate change, ICT, green growth and food security, the Heads of Delegation agreed to hold a Korea-CARICOM Joint Workshop on Agriculture and Meteorology in Korea in 2017. They, also, welcomed the initiative of the Global Green Growth Institute to explore the potential for a regional program including the strengthening of regional and national institutions to facilitate access to the GCF for climate resilient green growth with the CARICOM Secretariat facilitated and supported by Korea.

12.       Recognising the primacy of the United Nations in the maintenance of international peace and security, the significance of a multilateral rules-based order consistent with the Charter of the United Nations, and the common objective to uphold regional and international peace and security, the Heads of Delegation noted CARICOM's commitment to maintain a nuclear-weapons-free-zone (NWFZ) in the CARICOM region, as well as the Community’s outstanding role as a beacon of peace and harmony.

13.       Acknowledging the threat to CARICOM countries posed by the proliferation of small arms and light weapons, as well as transnational organised crime and its deleterious impact on the region’s sustainable development efforts, the Heads of Delegation agreed on the need for closer collaboration between Korea and CARICOM to address this issue.

14.       Expressing grave concern over the ongoing development of nuclear and ballistic missiles programs by the Democratic People's Republic of Korea (DPRK), the Heads of Delegation strongly condemned the DPRK's repeated violations of its obligations, including the ballistic missile launch of February 12, 2017. They urged the DPRK to immediately and fully comply with all its international obligations under all relevant United Nations Security Council and General Assembly Resolutions, including UNSC Resolutions 1718(2006), 1874(2009), 2087(2013), 2094(2013), 2270(2016), 2321(2016) and UNGA Resolution 71/86(2016), and abandon all nuclear weapons and existing nuclear and ballistic missile programs in a complete, verifiable, and irreversible manner.

15.     The Heads of Delegation reiterated their commitment to continue strengthening the ties of friendship and cooperation which will lead to the peace and prosperity of both regions, and highlighted the significance of the Inaugural High-Level Meeting as a milestone in bolstering the global partnership between Korea and CARICOM.

16.       CARICOM Member States and the CARICOM Secretariat expressed appreciation to Korea for the thoughtful arrangements made to facilitate the convening of the High-Level Meeting.  (end)