The Spirit of Chaguaramas 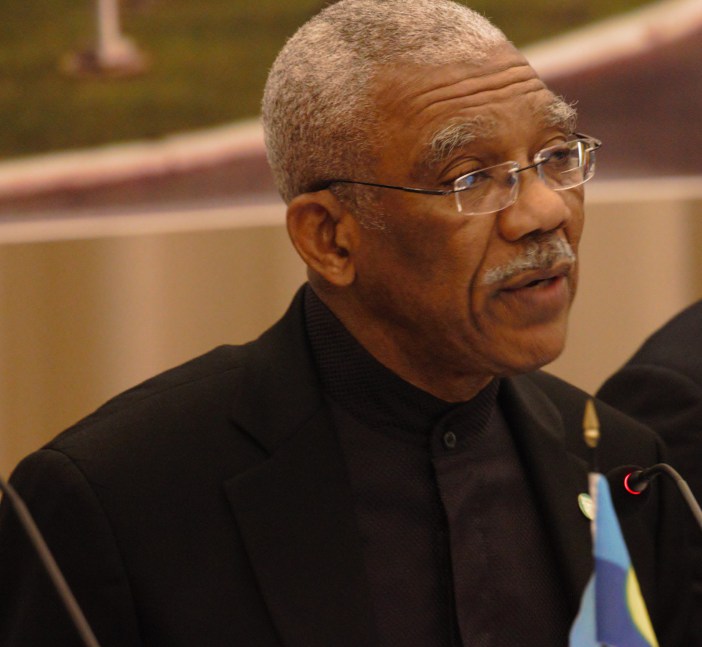 Chairman of CARICOM, President David Granger addresses the opening ceremony of the Twenty-Eighth Intersessional Meeting of the Conference of Heads of Government of CARICOM

The four founding fathers – Barbados’s Errol Barrow, Guyana’s Forbes Burnham, Jamaica’s Michael Manley and Trinidad and Tobago’s Eric Williams – who brought forth the Caribbean Community forty-four years ago, were men of discernment and determination. They were the courageous pioneers of the future. They were not craven prisoners of the past.

The ‘Founding Fathers’ were keen to protect the emergent new states from the perils of economic marginalization. This was a time when regional integration communities – such as the European Economic Community, the Latin American Free Trade Association, the Central American Common Market and the emerging East-African Economic Community – had taken root.

The world-wide trends were clear – integrate or disintegrate; combine or collapse; merge or be submerged in a sea of strife.

The ‘Founding Fathers’ recognized that, given the deformed character of our colonial economies and the small size of our markets, integration would allow for a larger and safer market and for a louder, stronger voice in negotiating with other countries and regions.

The ‘Founding Fathers’ were convinced that, if the Caribbean was to “fulfil the hopes and aspirations of their peoples for full employment and improved standards of work and living,” regional integration was an obligation, not an option, for governments.

Forbes Burnham, one of the ‘Founding Fathers’, speaking at the Conference of Officials of the Commonwealth Caribbean Territories in Georgetown, 50 years ago in August 1967, warned:

Either we weld ourselves into a regional grouping serving primarily Caribbean needs or, lacking a common, positive policy, have our various territories and nations drawn hither and thither into, and by, other large groupings where the peculiar problems of’ the Caribbean are lost and where we become the objects of neo-colonialist exploitation and achieve the pitiable status of international mendicants.

That ‘common, positive policy’ was conceived and the concrete foundation of our Community was laid at Chaguaramas on the three pillars of economic integration, foreign policy coordination and functional cooperation. We have erected a fourth pillar – security collaboration.

Economic cooperation is a fundamental pillar of our Community. The Caribbean, if it is to escape the hazard of economic emasculation in today’s global environment, must expedite the full implementation of the Caricom Single Market and Economy (CSME). We face threats that include dampened demand for our goods and services and distortions in our financial sectors caused by de-risking by international banks.

The CSME has the potential to enhance private sector growth and competitiveness by providing access to a larger pool of resources, facilitating the movement of human capital, catalysing the establishment of regional businesses and encouraging the free movement of goods. The CSME must not be allowed to become a victim of equivocation and procrastination.

Functional cooperation is an elemental pillar of our Community. The Caribbean Community has the capability to meet its food needs. Food security will ensure health and nutritional benefits for our people, earn foreign exchange and eliminate the bloated bill for importing food.

Ensuring regional food security is a cross-sectoral task involving cooperation in agriculture, finance, health and nutrition and infrastructure, among other sectors.  Belize, Guyana and Suriname – the Community’s three mainland states – are, together, bigger than Germany or Japan.

Food security can be advanced by the fuller utilisation of our lands for large-scale investment in agriculture and agro-processing and by dismantling barriers to regional trade in agricultural products.

Regional security is an essential pillar of our Community. The Caribbean – a maritime corridor between two continents – is vulnerable to narcotics-trafficking and human-trafficking, gun-running, terrorism and penetration by international criminal cartels. Transnational criminal threats demand multinational functional cooperation.

We live in uncertain times. We must continuously strengthen our security architecture in order to assure citizens and investors of greater security and stability. We must be vigilant, also, in the face of continuing threats to the sovereignty and territorial integrity of our member states.

The ‘Spirit of Chaguaramas’ is not the ghost or ‘jumbie’ of a dead project. It is the vital breath of life that inspires us to intensify regional integration.

The ‘Founding Fathers’ had the inspiration to see the need for integration and the motivation to establish this great movement. They have entrusted the happiness of our citizens and the prosperity of our Community to our hands.

We are, today, the trustees of this legacy. We must bequeath to our progeny a more prosperous region than we inherited from our progenitors.

Address of His Excellency Brigadier David Granger President of the Cooperative Republic of Guyana to the Twenty-eighth Inter-Sessional Meeting of the Conference of Heads of Government of the Caribbean Community (34.83 KB)