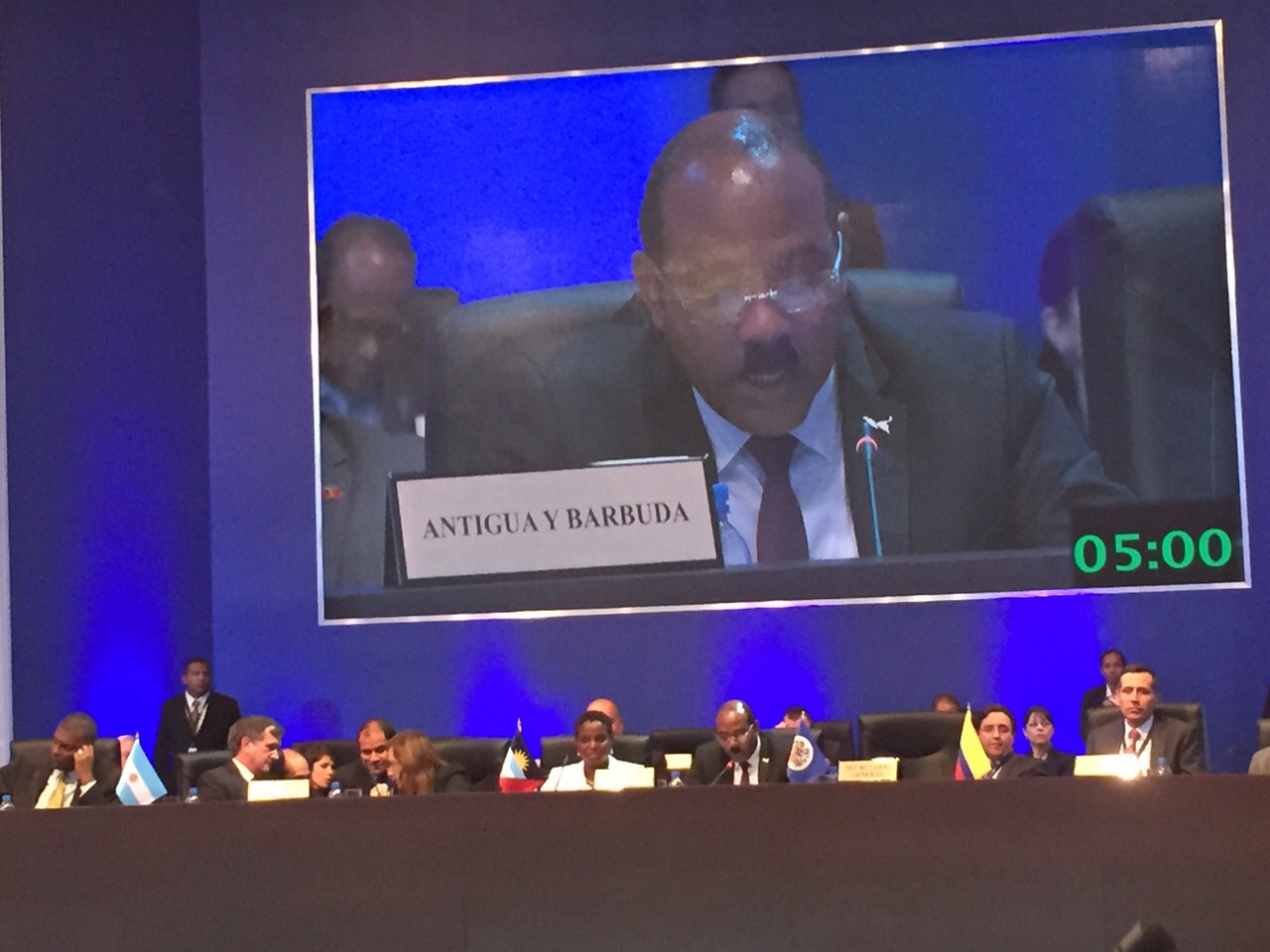 First, I thank the Government of Panama and President Juan Carlos Varela for their warm hospitality.  My delegation and I are honoured to participate in this historic conference in which the entire Americas is represented and certainly to include the delegation of Cuba headed by His Excellency Raul Castro Ruz.

My visit to your beautiful country has been a kind of home coming.

Of course, the relationship between Panama and countries of the Caribbean go back a very long way.

Thousands of Caribbean people including, my late maternal great grandfather, (Franklyn Richards) came to this country to help lay the foundations of its economy by digging the Panama Canal.

It can truly be said that the blood, sweat and tears of Caribbean people are ingrained in the soil of Panama.

What a magnificent endeavour what an amazing feat it was!

It utilised the natural resources of Panama, with United States funding the technology, and with Caribbean labour to transform global trade, opening possibilities of which, up to then, the world could only dream.

That was one of the finest accomplishments in our Hemisphere.

While not all aspects of its realisation were covered in glory and honour, it showed what could be achieved through joint effort and practical co-operation of the nations of our Hemisphere.

That past illumes, for each of us, the future that could lie before us, if we were to recognise the global potential of the nations of our Hemisphere working together, not as adversaries and rivals, but as partners and supporters.

It is of such a future that my country looks forward.

The potential for that future is encapsulated in the theme of this Summit: Prosperity with Equity: The Challenge of Cooperation.

The prosperity of any one nation or group of nations within our Hemisphere does not have to be achieved at the expense of other members.

This Hemisphere has every basis for being among the most economically powerful, politically stable and socially progressive in the world.

Our natural riches are abundant and diverse; our people are talented and skilled; we have all risen from colonialism and exploitation in one form or another, to produce nations that are vibrant and forward-looking.

The challenge we face is to overcome narrow political considerations for the greater good of all.

Unless all our nations are able to do so, some may enjoy prosperity but equity will be denied to many, and our Hemisphere will languish in a sea of distrust and paralysis.

Others will take advantage of our division, and our Hemisphere will be poorer for it.

That is why I fervently and happily welcome the participation in this Summit of Cuba and its President Raul Castro. I do so in the presence of the United States of America officials.

The rupture in US-Cuba relations extended for much too long.

The Presidents of these two great nations of our Hemisphere deserve our congratulations and our applause for their enlightened decision to normalise relations.

At the Cuba-CARICOM Summit last December, I called on the United States Congress to end the trade embargo against Cuba.

I do so again at this Summit in the name, not only of hemispheric solidarity, but also of good sense.

And, I remind us all of the teaching of the philosopher Aristotle that: “If liberty and equality, as is thought by some, are chiefly to be found in democracy, they will be best attained when all persons alike share in the government to the utmost”.

It is in the context of all that I have said so far, that – not for the first time - I also call for the swift improvement in relations between the governments of the United States and Venezuela.

We welcome the public statement of officials of the US National Security Council in which the acknowlege that Venezuela poses absolutely no threat to its national security.  We also welcome their statement that they have no hostile designs on Venezuela.    We however, believe that by withdrawing the executive order it will give concrete effect to those positions.

My country regards both the United States and Venezuela as important partners in our quest for economic development, and we also see each of them as crucial to our hemispheric stability and progress.

We call for amicable dialogue on the issues that lie between them.

And we encourage any group of our hemispheric governments to facilitate a constructive dialogue. We also call on both nations to commit themselves in resolving their differences expeditiously in restoring full hemispheric peace and solidarity.

Mr Chairman, the imposition of extraterritorial laws and policies by powerful countries have long bedevilled good and constructive relations within our hemisphere.

It is time that these unilateral actions come to an end in favour of genuine dialogue and multilateral cooperation, for they succeed in doing little else, but fomenting resentment and causing economic dislocation.

High debt to GDP ratios is a problem confronted by many of our countries.

In the small and vulnerable nations, such as my own, it is extremely difficult to grow out of debt without concessional financial assistance from the international community.

The open nature of our economies, the dependency on exports of a limited number of commodities, and susceptibility to external shocks continue to make for economies that are structurally vulnerable.

Yet, because our per capita income levels are not below USD$1,000, we do not qualify for differential treatment.

However, helpfully and in the context of mutual benefit, the United States, at the recent CARICOM-US Energy Summit in Washington, undertook to disassociate access to United States concessional financing for energy and climate change projects from the per capita income criteria used by multilateral financial institutions to graduate developing countries to middle income status.

This is a welcome undertaking that we urge the United States to fulfill.

It shows that it is possible to get change in the lending policies of International Financial Institutions.

In that connection, we call on this Summit to support a policy within the International Financial Institutions, for small and vulnerable Caribbean countries to be granted access to concessional financing.

Mr Chairman, all our governments have, as their primary duty, the tasks of ending poverty and creating gainful employment for all our people.

If we can achieve those goals, we would end a number of the most pressing problems that now beset us collectively, including drug trafficking and refugees.

I am conscious, as I speak, that our Hemisphere suffers from high levels of inequality, and that unless those inequalities are overcome through the active and committed policies of our governments to cooperate with each other in our mutual interest – the theme of this Summit will be a mere unfullfilled aspiration.

But, I am encouraged by a young American who wrote twenty years ago the following words, and could have been talking about all of us as citizens of these Americas and the Caribbean:

A government that truly represents these Americans – that truly serves these Americans – will require a different kind of politics.  That politics will need to reflect our lives as they are actually lived…  It will have to be constructed from the best of our traditions and will have to account for the darker aspects of our past…  And we will need to remind ourselves, despite all our differences, just how much we share: common hopes, common dreams, a bond that will not break.[ii]

I am indebted to Barack Obama for that stirring reminder of what is possible, and what we together might achieve.

Let us continue to work in solidarity for the advancement of the peoples of our Hemisphere.