Speech at the launch of the 2015 Human Development Report 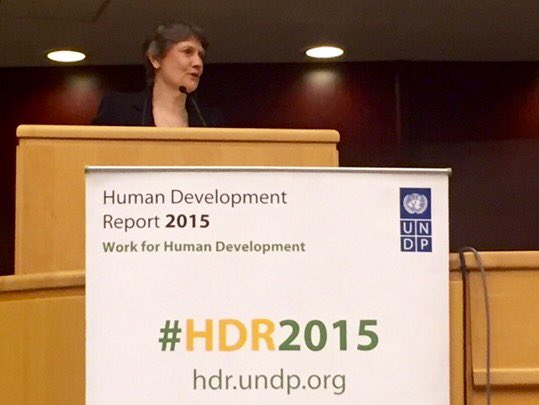 I am delighted to welcome you to the launch of the 2015 Human Development Report. UNDP expresses its profound gratitude to Ethiopia for hosting this launch, and for His Excellency the Prime Minister’s presence here with us today to give the keynote speech and launch the report.

There can be no doubt that history will judge 2015 to be a remarkably important year for setting global development-related agendas.

In July, here in Addis Ababa, a new global agenda for financing development was agreed.

Earlier, in Sendai, Japan, the new framework for disaster risk reduction was agreed.

In September the Sustainable Development Goals were adopted in New York.

In the past two weeks COP21 in Paris has progressed the global effort to tackle climate change, culminating in a landmark new climate agreement on Saturday.

There have also been major global and regional meetings on migration.

I mention all these major agendas because work, the subject of this year’s Human Development Report, relates to them all.

Tackling climate change,as countries re-committed to do at COP21 in Paris last Saturday, will require structural changes to every economy. New work will be created. Existing jobs will disappear, or will need to be transformed. Climate action goals will not be achieved without this shift.
Migrationpresents political challenges to many countries, yet also stands to benefit source and recipient countries if it is orderly. That requires both more legal channels to be established, and international agreements to be upheld.

The 2015 Human Development Report comes at a time of major changes in the world of work, affecting when, how, and where people work. This too creates both opportunities and challenges. We see:

dramatic demographic Populations of older people are growing rapidly worldwide. By 2050, people older than sixty will, for the first time in history, equal those younger than fifteen. Societies worldwide are rethinking the role which older people play in the workforce, and exploring whether the retirement age should be raised.
globalisation and the digital revolutionare continuing to gather speed.  There are now around as many mobile phone subscriptions - seven billion – worldwide as there are people. This has dramatic impacts on the world of work, as it does on all aspects of economies and societies.

To understand the impacts of development fully, one needs to look at how it is affecting people’s lives.  That has been at the heart of every human development report in the past 25 years.  Changes in the world of work have major implications for human development – which is why this new report is so timely.

Allow me now to turn to the key messages of the report.

Work is More than Jobs

This report puts people rather than economies or economic growth at its centre, by focusing on all kinds of paid and unpaid work from running a home to running a business.

Work helps people escape from poverty. It can also help forge stronger communities, develop skills, and give people a sense of purpose. Work is much more than a pay check: it is a foundation for both the richness of economies and the richness of human lives.

There is no automatic link between work and human development.

Even though people are healthier and better educated, and a much smaller proportion are living in extreme poverty than ever before, major inequities and challenges continue to prevent some groups of people from entering the work force.

This matters – access to work is vital for human development. But the link is not automatic. It is the quality of work – not just the amount – which determines whether work will enhance human development. Today more than 1.5 billion people in developing countries are working in jobs which offer few rights and inadequate protection should they lose their livelihoods.

This report pays particular attention to the most vulnerable in society, including those who are most unfairly treated in the labour market. They include child labourers, trafficked workers, forced workers, workers in hazardous conditions, and women.

The report makes the case that women are especially disadvantaged in the world of work:

Three out of every four hours ofunpaid work are done by women.  Compare that to men, who do two of every three hours of paid  Pressures on women will increase as countries age, because it is women who still do most of the care work.
Not only are women doing much more unpaid work than men, but when they get paid, they get paid less. Women earn an average of 24 per cent less than their male colleagues worldwide.
Women hold only around a fifth of senior leadership positions worldwide.  Indeed, almost one-third of businesses have no women at all in senior management positions.

The report argues that societies urgently need new policies, institutional reforms, and more equitable access to care services to address these major gender imbalances in paid and unpaid work. It calls on governments to ensure:

equal pay for equal work for women and men;
adequate provision of paid parental leave for both women and men; and
tackle the harassment and social norms which exclude many women from paid work.

Sharing the burden of unpaid care work and enabling more women to enter the labour force on equal terms has wide benefits. It stands to reason that whole societies are worse off if half of their members can’t participate fully.

Achieving sustainable development Will Mean Changes for the Workforce

Many jobs will need to change if countries are to make progress on building low emission and climate-resilient futures. These changes will help determine what the labour market of tomorrow looks like.

Certain jobs – renewable energy production, for example - will grow in number. Other work will need to change, such as some methods of agricultural production.  Other jobs will disappear altogether over time. Countries will have to confront political, social, and economic challenges as these changes take place.

Globalisation has winners and losers

The digital revolution and deepening globalization have brought greater workforce flexibility and new working patterns, but they have also heightened insecurity and vulnerability.

There are more opportunities for highly skilled workers and those with access to technology and the internet. Digital technologies connect producers to consumers in global marketplaces, improving access to goods, services, finance, technology, and ideas.  Those with skills in demand in the digital economy can command salaries set in global labour markets.

But these same changes bring risks for others, including those without access to the internet. The report predicts that many routine jobs, such as clerical work, will continue to disappear. Globalisation also means other jobs will move abroad.

The report concludes with a call for global and national action to guarantee workers’ rights and promote sustainable work in the fast changing world of work. Three particularly important proposals highlighted by the report are:

establishing a new social contract between state, society, and private sector to improve social protection;
deepening co-operation between workers, businesses, and governments around the world to craft a Global Deal to guarantee workers’ rights. The International Labour Organisation’s recent convention for paid domestic workers points in this direction; and
promoting fair income, security in the workplace, and social protection for workers and their families through the Decent Work Agenda of the ILO.

This new global Human Development Report is an urgent call to tackle one of the world’s great development challenges - providing enough decent work and livelihoods for all.

Work provides the means to tackle poverty, empower minorities by being inclusive, and protect our environment if jobs are green in a green economy. The world of work is changing more rapidly than ever before.  The question is: what are the best policy responses to ensure that human development benefits from that change.

I hope that this report will generate dialogue and debate on the challenges identified, as all previous Human Development Reports have done.

In that way, the Report will help countries to adjust to the changing world of work in ways which will advance human development.

In closing, let me congratulate Selim Jahan and the whole team at the Human Development Report Office, and all who have contributed to the report, on yet another important contribution to human development.