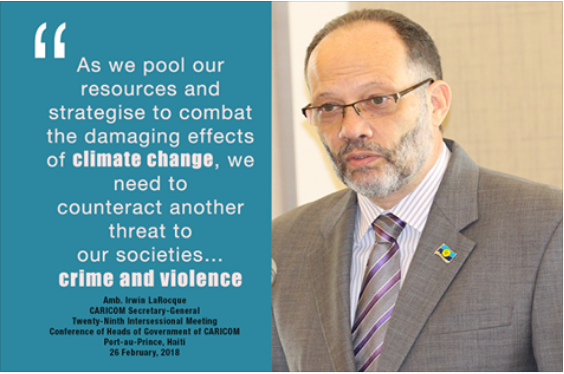 His Excellency Jovenel Moise, President of the Republic of Haiti and Chairman of the Conference of Heads of Government of the Caribbean Community;

Dr. the Rt. Honourable Keith Mitchell, Prime Minister of Grenada and Out-going Chairman of the Conference of Heads of Government;

Other Heads of State and Government;

Honourable Ministers of the Caribbean Community;

President of the Senate;

Speaker of the House of Deputies;

President of the Supreme Court;

Members of the Diplomatic Corps;

Representatives of the Media;

People of the Caribbean Community.

It is my pleasure to welcome you all to the Twenty-Ninth Inter-Sessional Meeting of the Conference of Heads of Government of the Caribbean Community (CARICOM).

President Moise, I am sure I speak for all the delegations in expressing appreciation for the splendid arrangements made for the conduct of this Meeting.  They have undoubtedly created an environment conducive for productive deliberations.  I must also express our gratitude for the generous hospitality and delight at the warm welcome extended to us by the Government and People of Haiti.

Mr. Chairman, Heads of Government, I must also thank Dr. the Rt. Honourable Keith Mitchell, Prime Minister of Grenada, for his excellent leadership of the Community during one of the most difficult periods in our history.  Prime Minister Mitchell has been relentless in his efforts to obtain support for the Members of the Community devastated last September by Hurricanes Irma and Maria.

In his positions as Chairman of the Community, the Caribbean Development Bank and the World Bank Small States Forum, he advocated for their recovery and rebuilding process. I also need to mention the yeoman service by the lead Head of Government for Sustainable Development the Honourable Allen Chastanet, Prime Minister of Saint Lucia.

Five months after the Region was faced with an unprecedented occurrence of successive major hurricanes striking within two (2) weeks, the people of Dominica, Barbuda, Anguilla, the British Virgin Islands, Ragged Island in The Bahamas, and the Turks and Caicos Islands are engaged in rebuilding their lives. The Community, governments and people, rallied magnificently along with our international partners to provide support in the immediate aftermath of the disasters and also in the relief efforts.

The cost of rebuilding, which has been assessed at more than $5 billion (US), demands significant levels of financing which we are unable to generate on our own. The magnitude of that rebuilding effort will require a long term effort.

Recovery and reconstruction are ongoing even as the Region prepares for the next hurricane season which is five months away.  The reality is that the intensity and frequency of severe climatic events, whether it be hurricanes, droughts or unseasonal heavy rainfall are our new normal.  We all must be prepared.

That preparation is necessary for all of our Member States and Associate Members.  It is why we must pursue the goal of creating a climate resilient Community.

Building resilience requires significant investment to reduce risks and vulnerabilities to prepare for the impact of such intense climate-based events.

What is needed is access to resources which must include significant grant funding and very concessional financing.

Without access to such financing, this would exacerbate already high debt levels across the Region, which is due in large measure to exogenous shocks including severe climatic events.

Most of our countries are categorized as middle or high-income and are largely ineligible for concessional development financing and Official Development Assistance (ODA), due to the use of GDP per capita as the principal criterion.

The Bahamas, an upper middle income country, sustained cumulative damage and loss of US $678 million by hurricanes that hit between 2015 and 2017 which necessitated access to non-concessional financing.

In the case of our Associate Members their sources of finance are limited. They do not have access to international financial institutions. The British Virgin Islands sustained damaged in excess of US one billion dollars from Hurricane Irma.

There is need for new thinking, leading to changes in the criteria for determining access to concessionary financing by small, vulnerable, middle income countries.

We began the task of attracting resources with the CARICOM-UN High-Level Pledging Conference, held in New York last November.  Some of the pledges have been honoured and we continue to collaborate with our partners to realise the other commitments.

The issue of Disaster Management and Climate Change will be discussed at this meeting with the full realisation that as the Prime Minister of Dominica, the Honourable Roosevelt Skerrit said: we are on the “front line” facing the effects of climate change.  Our very existence is at stake.

As we pool our resources and strategise to combat the damaging effects of climate change, we need to do so as well to counteract another threat to our societies.

I refer to the effects of crime and violence.  This is taking a heavy toll on the society not only with respect to the loss of life but with injuries and psychological trauma.

The greatest impact is on our families. The foundation of any strong society is the family, and it is within that circle that the battle against this scourge must begin.  The tried and tested values of love, hard work, honesty, character building, belief in self and self-respect are key weapons which must also be deployed in our streets, in our towns and in our villages.  The message must be clear.  Crime and violence do not provide a pathway to success.

Five years ago, here in Port-au-Prince, we adopted the CARICOM Crime and Security Strategy.  The time may have come to revisit it and identify the areas in which we need to improve in order to make it more effective.

Last July, several Member States signed the CARICOM Arrest Warrant Treaty which simplifies the procedure of returning fugitives to the country where charges have been laid. I look forward to the Treaty being ratified as soon as possible.

We are close to finalising the Agreement on the Return or Sharing of Recovered Assets. This provides a framework for the return or sharing of criminal assets which have been moved to another jurisdiction. I had hoped that the negotiations would have been completed to enable signature at this meeting. I now expect that it will be ready for our meeting in July.

These are important legal instruments which are significant additions to our armoury against trans-border crime.

We have also been working on a Counter Terrorism Strategy. For us in CARICOM, an act of terrorism or violent extremism in one Member State, will resonate and have repercussions throughout our Region.

The issue of crime and violence is a regional problem that demands a regional solution.  It requires the full co-operation of all the national and regional agencies charged with the responsibility for addressing crime and security.

Mr Chairman, distinguished Heads of Government, we cannot allow the threats of climate change, and crime and violence to derail our efforts at building a viable and prosperous Community for all our people.  We have made substantial progress in many areas including with the Single Market component of the CARICOM Single Market and Economy (CSME).

The Implementation Plan for the outstanding issues related to the Single Market, agreed to last July, must be adhered to, for full compliance in the specified time frame. We must accelerate the use of the provisions of the CSME to help us build our economic resilience.

I was quite pleased to participate last Friday at a forum on the CSME here in Port-au-Prince with the Haitian private sector, youth and other stakeholders. The eagerness by all for Haiti to complete its internal arrangements to become CSME compliant was encouraging. I have no doubt that the creativity and entrepreneurial spirt of this vibrant country will ensure that Haiti plays a major role in the CSME.

A critical aspect of the CSME is the Transportation sector which will receive a boost at this Meeting with the New CARICOM Multilateral Air Services Agreement being ready for signature. This is a major advance as it expands the scope for airlines owned by CARICOM nationals to provide air services throughout the Community.

The Agreement allows for no restriction on routes, capacity or traffic rights. It should facilitate increased intra-regional travel and provide more cargo options for exporters and importers with resulting cost savings.

In the midst of our strenuous efforts to enhance our economic prospects, there are issues which are creating impediments. One such is the continuing unfair labelling of some Member States as non-cooperative tax jurisdictions.

Member States of our Community continue to work diligently to comply with the onerous regulatory measures, and standards for tax transparency, accountability and cooperation established by the relevant global authorities.

Unilateral actions have been taken, for instance, by the European Union (EU). That process is clearly outside the inclusive framework that has been adopted by the international standard-setting bodies.

The unpredictability and uncertainty arising from the evolving nature of the EU criteria and listing process is a matter of great concern. Indeed their actions may actually constitute an infringement on the right of sovereign States to determine their fiscal policy.

The Community calls for recognition of the primacy of the established international standard-setting bodies. Further there must be an all-inclusive process in the determination and application of agreed standards to reflect mutually determined good tax governance principles.

The impact of blacklisting is deleterious to the economic prospects and social progress of CARICOM States.  Labelling as a ‘tax haven’ can contribute to the further marginalization of CARICOM States in respect of access to the global financial system by the reduction of correspondent banking services.

The further loss of such services remains a significant risk for Member States particularly as the labelling processes accelerate.

Mr Chairman, Excellencies, Heads of State and Government, there is no denying that these are trying times.  The resilience of our society and our people is being severely tested.  There is no better illustration of how to withstand and overcome these challenges than the country where we are today.  Haiti’s history of resolve and resilience can inspire us as we strive to surmount the obstacles that impede our progress towards a safe, secure, viable and prosperous future for all of our Community.