Remarks by the Rt. Hon. Freundel Stuart, Prime Minister of Barbados, on the occasion of the High-level Strategic Dialogue “CARICOM: Vibrant societies, resilient economies: a Partnership for Implementation”  July 2 - 3, 2015 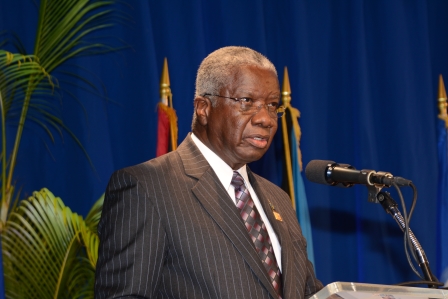 Colleague Prime Ministers, Ministers of Cabinet, Excellencies, Distinguished Guests, Ladies and Gentlemen: I am delighted to endorse the sentiment already exp ressed by Foreign Minister Maxine McClean and to welcome you once again to this High Level Strategic Dialogue, entitl ed "Vibrant Societies; Resilient Economies: A Partnership for Implementation".

I am especially pleased to see a number of my fello w heads of government of CARICOM countries and to be able to welcome amongst us the Secretaries-General of the United Nations, the Commonwealth and the Organisation of American States. I also extend a wo rd of thanks to the many organisations and individuals who have made this gathering possible and who will be contributing to our discussions today.

Among these, I thank, in particular, Sir George All eyne, Chancellor of the University of the West Indies, distinguished Caribbean scholar and leader who will be the moderator of today's session.

Allow me to begin by addressing, head on, as it wer e, a line of thinking about events such as this one and, for that matter, the Conference of CARICOM Heads of Governme nt which will begin later today, here in Barbados. The se are, say the critics, mere talking shops, unconnected to the needs of our societies, more focussed on rhetoric t han reality.

Almost exactly 21 years ago, in these very halls, B arbados created history by hosting the First United Nations Global Conference on the Sustainable Development of Small Island Developing States (SIDS). That Conference, f ar from being a talking shop, laid the groundwork for the S IDS process which continues today.

The Third International Conference of SIDS was held in Samoa in September 2014 and elements of the outcome document, the SAMOA Pathway, will be incorporated i nto the Post 2015 Agenda to be adopted by the Heads of State and Government of the UN at their Summit in September 2015.

Thus, it was with great pride that this morning, to gether with the Secretary General of the United Nations, H.E. Mr. Ban Ki-moon, I unveiled a plaque in commemoration o f that historic event in 1994.

The unveiling of that plaque is not merely a symbol of a past event. It should serve of a constant reminder of our strength and of the leading role that we, as small states with all our challenges, vulnerabilities and imperf ections, have played in the past and can continue to play on issues of great importance and relevance to the entire international community.

As we engage in our deliberations at this High Leve l Dialogue, we do so with the conviction that our siz e does not determine the value of our contribution, or our relevance but rather, that it is the quality of our ideas, our initiatives, our creativity and our dynamism which distinguish us. Preparation for these meetings will form the backdr op of our deliberations. The focus of our discussion, how ever, will be local — very specific to CARICOM countries.

We will engage with you in discussion on our priorities as a region and strategies to ensure that our voice is heard an d our concerns are reflected in the final outcomes of the se meetings. We look beyond the outcome documents to implementation bearing in mind our unique status as small island developing states. We focus closely on the means of implementation, issues such as access to financing, partnerships, building capacity as well as legal, administrative, statistical and other policy framew orks to support the effective implementation and monitoring of the Sustainable Development Goals (SDGs) which will be agreed on. We are challenged, as member states and actors in t he international community, to commit to and engage fu lly in these processes that will ultimately shape and prot ect the global landscape in the post-2015 era.

CARICOM is uniquely poised to facilitate this proce ss with member states working in conjunction with our partn ers in the private sector, development institutions and ci vil society groups. 10 As CARICOM countries work towards the goal of vibra nt societies as a platform for the creation of resilie nt economies, we must depend, first and foremost upon ourselves: upon our peoples, whose ability to survi ve and thrive in the most adverse circumstances is well-kn own; upon our civil society and other institutions, whos e democratic foundation is at the heart of their abil ity to be effective; upon our private sector and our entrepre neurs whose legitimate aspirations for commercial success are steered by the invisible hand of which Adam Smith s poke to create what we would today call "public goods"; upon the unique and positive role of our labour unions; and upon our partnerships with industrialised countries and international institutions.

Most important of all, we must continue to be a sou rce of inspiration for the young people of our region. The distinguished American economist, Joseph Stigli tz, wrote, in his book "Globalisation and its disconten ts" that "Developing countries must assume responsibility fo r their well-being themselves..." but that international institutions have a key role in making "Globalisation work, and work not just for the well off and the industrial countries, but for the poor and the developing nations."  That is the partnership that we seek and strengthen today. A partnership for implementation, a partnership to en sure that ours are vibrant societies and resilient economies. I thank you