Remarks by The Most Honourable Andrew Holness, O.N., M.P., Prime Minister of Jamaica To the Opening Ceremony of the Thirty-Seventh Regular Meeting of the Conference of Heads of Government of the Caribbean Community (CARICOM) Georgetown, Guyana, 4– 6 July 2016 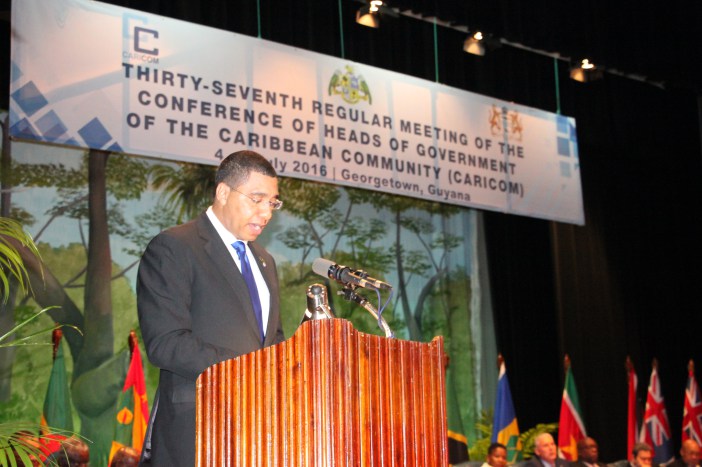 I am honoured to join colleagues here in our beautiful sister state of Guyana, at this, the Opening Ceremony of the Thirty-seventh Regular Meeting of the Conference of Heads of Government.

I thank you President Granger, Secretary General LaRocque and the Government and people of Guyana for the warm hospitality extended to my delegation since our arrival . I certainly appreciate the efforts made to facilitate this important meeting and look forward to a successful outcome.

Our meeting today is no ordinary gathering. It is taking place at a very important juncture in the history of our region and globalized world.  A world in which events far afield can have local and regional impacts.

Just over a week ago, in a historic referendum, the majority of voters in the United Kingdom chose to leave the European Union, causing shock to Britain, the EU and the international community and creating major panic and disruption in financial markets across the globe.  Most countries did not anticipate that the United Kingdom would withdraw from the most highly developed integration movement in the world - an integration construct on which our very own CARICOM was modelled and to which we have often looked for guidance and best practices.

This development in Europe, aside from triggering debate in Jamaica and no doubt in other countries in the region, about the relationship with, and the benefits of, membership in our own regional bloc, will have far-reaching impact on our already vulnerable economies in various areas such as trade, tourism, financial services, immigration, development assistance and overall CARICOM-UK and CARICOM-EU relations.  As a region, we must proactively assess the likely threats and opportunities these global changes present. However, as we consider the evolving global order, equally we must seize the opportunity to reflect upon our own Community, to assess whether we are on track with our plans and commitments to secure economic growth and prosperity for our people.

Our region, as resilient as we are, continues to face existential threats such as,

the effects of climate change and vulnerability to natural disasters,
the rise in crime and violence associated with organized criminal enterprises in narco-trafficking, small arms trafficking, contraband trafficking, human trafficking and money-laundering,
energy and commodity price instability and
high indebtedness.

This is further exacerbated by our generally small size and economic openness. While we focus individually on our respective national challenges, it is imperative that we engage and develop regional and international strategies in our efforts to achieve economies of scale and collectively address those issues that affect us in common.The establishment of CARICOM by the Treaty of Chaguaramas, on July 4, 1973, was based on this premise. It was envisaged as the vehicle through which countries could best pursue a united and an integrated Community, defending common interests, while responding to the global challenges.

Forty-Three (43) years later, we can say that much has been accomplished. We have had positive achievements in foreign policy coordination and functional cooperation including in health, education, security, ICT, emergency management and disaster mitigation. The UWI and CXC are excellent examples of what regional cooperation can and has achieved. However, I am sure all would agree that much more could have been accomplished and there is still much more to do. Realistically, one must admit that there are difficulties in implementing important decisions and challenges in some instances, where regional initiatives have not materialized into tangible projects for implementation at national level.

Even with its challenges, Mr. Chairman, CARICOM remains a well respected regional bloc in international fora. Only last year, during the 36th Regular Meeting of Heads, His Excellency Ban Ki-Moon, United Nations Secretary-General in his address to Heads, noted that the Caribbean is “home to ideas, examples and solutions”. He indicated for example that although the Caribbean region is among the smallest contributors to climate change, it is among the strongest leaders in responding to the challenge. This latter attribute was clearly demonstrated at the highly successful Paris Climate Change Conference last year.

For this reason, it is commendable that CARICOM has embarked on a reform process to improve its effectiveness. The adoption of the Strategic Plan for growth and development is a step in the right direction. It is our expectation that the Plan will be fully implemented to strengthen governance, capacity-building and our regional economies.

On a national level, and in line with my Government’s thrust to strengthen the Jamaican economy, we have undertaken a number of important growth initiatives, including the establishment of a Ministry of Economic Growth and Job Creation to eliminate the bureaucracy that stifles growth, together with the Economic Growth Council, geared at creating the right framework and atmosphere to encourage firms to increase investment and innovation and labour to increase productivity, thereby driving economic growth, job creation and the general wellbeing and prosperity of our people.

Almost a week ago, I officially launched the Commission to Review Jamaica’s Relations within the CARICOM and ACP CARIFORUM Framework (the CARICOM Review Commission). This Commission will, among other things, examine the extent to which Jamaica’s participation in CARICOM has impacted on its economic growth and development, as well as review CARICOM arrangements within the context of the wider Caribbean, including the Dominican Republic and the Republic of Cuba.

Notably, it is the first time that a body has been established in Jamaica specifically to assess the benefits, opportunities and challenges of our membership in CARICOM. I am pleased that the Honourable Bruce Golding, former Prime Minister, has undertaken to chair this important Commission which will comprise representatives from the two major political parties, relevant public and private sector bodies, as well as civil society and academia. This will ensure that the perspectives of all stakeholders are taken into account.

Given the commitment of my administration to strengthen the Jamaican economy, and the importance of trade to that process, we look forward to receiving the report of the Commission.

Regional integration is a not an end in itself; it is a means to achieve a much broader objective - the economic growth and development of our countries and the improvement of the lives of our people. It should allow small economies, like ours, to overcome regional constraints, build our resilience and take advantage of new and existing opportunities in the global market.

Jamaica has been supportive of the CSME from its inception. We have undertaken the necessary reforms, including   changes to our legislation, in fulfillment of our obligations under this regional undertaking.

Jamaica now provides a strong, transparent and predictable regulatory environment for those who wish to relocate there for work purposes. This is indeed an important pillar of the regional integration process.  For many, including the man in the street, free movement represents a tangible way in which he can benefit from regional integration.

Jamaicans have been expressing concerns about increased cases of denial of entry to other jurisdictions and questions their treatment at ports of entry.  These must be urgently addressed in a meaningful way, otherwise the economic sense of Caricom is increasingly questioned. We have begun to discuss the matter bilaterally and are encouraged by the level of understanding and responsiveness to our concerns.  We believe that bilateral consultations supported by additional effort in the institutions of our Community can make the movement of labour equal with the movement of goods, extending the progress and benefit of the integration effort.

As I reflect on the current challenges in our community, I have observed that an important element of the regional relationship to which we have paid insufficient attention over the years, is that of strengthening our bi-lateral relations with each other. In this regard, we are pleased to be negotiating a Joint Commission agreement with Trinidad and Tobago through which we hope to develop a mutually beneficial cooperation programme. We intend to undertake similar initiatives with other Member States.

Let us harness our collective potentials. Let us strengthen our collaboration and cooperation to address intra-regional trade, national security, banking and financial access, climate change and weather disasters and the increasing threat of crime to our societies.

Let us ensure that while we pursue economic growth and job creation for our countries that we work to ensure that our citizens do not feel disenfranchised or disillusioned.

I quote from the Treaty Chaguaramas that brought us together back in 1973:

“The Governments of the contracting States,

Determined to consolidate and strengthen the bonds which have historically existed among their peoples; Sharing a common determination to fulfil the hopes and aspirations of their peoples for full employment and improved standards of work and living;

Conscious that these objectives can most rapidly be attained by the optimum utilisation of available human and natural resources of the Region; by accelerated, coordinated and sustained economic development, particularly through the exercise of permanent sovereignty over their natural resources; by the efficient operation of common services and functional cooperation in the social, cultural, educational and technological fields; and by a common front in relation to the external world; Convinced of the need to elaborate an effective regime by establishing and utilising institutions designed to enhance the economic, social and cultural development of their peoples.”

Let us continue to abide by the spirit and letter of the treaty of Chaguaramas. Let us create the win-win space where all countries benefit from participation in a common market. There is strength in unity of purpose and purpose is as strong as our weakest member. The objective of the integration movement is to make everyone strong. Our strong and prosperous countries will make a strong and prosperous Caribbean.