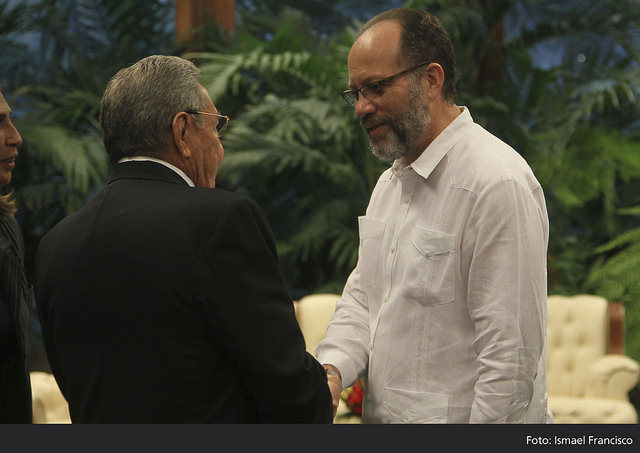 This Fifth CARICOM-Cuba Summit is testimony to the solidarity and fraternal relationship that exist among us as Caribbean people.  Forty-two years ago today, we began this journey when the four independent countries of CARICOM, acting in concert, came to Havana to establish diplomatic relations. This action broke a hemispheric diplomatic embargo. It was an expression of our solidarity with Cuba, our Caribbean sister nation, and of respect for the right to self-determination.

Twelve years ago, as a demonstration of our deepening relations, we saw the need for a more regular and structured engagement at the highest level.  These Summits, along with the interaction of our Foreign Ministers, have served to strengthen the ties and to broaden the areas of co-operation between us. Because of the strength of our relations, all our independent Member States have diplomatic representation here in Havana. This is one of only three locations across the world, which has such a CARICOM diplomatic presence.

Cuba has demonstrated its commitment to the sustainable development of our Region, by providing generous assistance in areas such as health, education, agriculture and sports. This has been a significant boost to the Caribbean Community, in particular to our efforts at strengthening our human resource capacity.

More recently, Cuba came forward to assist CARICOM countries prepare, in the event that Ebola comes into the Region. This is in keeping with Cuba’s leadership role in the global fight against the deadly disease, which has seen more than 250 medical personnel from this country, in the vanguard of the battle in West Africa. This is no surprise to us who have experienced Cuba’s humanity, such as with Operation Milagro.

Our shared space, the Caribbean Sea, has provided us with opportunities for collaboration. We have worked together at the level of the Association of Caribbean States (ACS), to have the Caribbean Sea recognised as a zone for sustainable development.  We are also working together in the Community of Latin American and Caribbean States (CELAC), in advancing hemispheric integration on a range of socioeconomic, political and environmental issues. We are engaged within the Alliance of Small Island States (AOSIS), to advocate for a new Climate Change Agreement.

The effects of global warming, including sea level rise, and more severe storms, floods and droughts, have been felt all across this region. As countries in an area of the world designated as the most prone to weather-induced disasters, we have a vested interest in the finalisation of a binding global agreement, at the 21st Conference of the Parties (COP21) in Paris next year.

Our co-operation in combating the threat posed by Climate Change is therefore of utmost importance.  The mutually beneficial collaboration between the Caribbean Community Climate Change Centre (CCCCC), and its counterpart the Cuban Institute of Meteorology (INSMET), is an increasingly significant element in this regard.

CARICOM and Cuba as Small Island and Low-lying Coastal Developing States (SIDS), share similar perspectives on the negotiations for the United Nations Post-2015 Development Agenda.  If that Agenda is to fulfil its intended objective of reducing global disparities, the needs of SIDS must be accorded special attention.  CARICOM and Cuba should once again join hands, as we link with other SIDS in the ongoing struggle to attain sustainable development.

We have been seeking to consolidate our friendship through the expansion of trade, under the CARICOM Cuba Trade and Development Agreement.  The recent revitalisation of our Joint Commission should serve as an impetus in this regard. We look forward to an early completion of the discussions, leading to expanded access into each other’s markets.

Excellencies, Heads of State and Government, it is worth noting that the four founding fathers of CARICOM, from Barbados, Guyana, Jamaica and Trinidad and Tobago, were the same Leaders who broke the diplomatic embargo on Cuba with their visit to Havana in 1972.  They had a vision for a united Caribbean regardless of colonial history.  Their path-breaking action arguably set in motion a process, which encouraged more inclusive regional integration arrangements, particularly among developing countries in the hemisphere. We look forward to Cuba’s presence in all hemispheric councils. Similarly, we continue to call for and look forward to, an end to the unjust economic and trade embargo imposed by the United States.

As I close, I express my appreciation and that of all the CARICOM delegations for the gracious and generous hospitality extended to us by the Government and People of Cuba.  This has undoubtedly created a welcoming environment for this Summit in your beautiful city of Havana.

Today therefore is a day of celebration.  The 8th of December is a date etched in the history of the Caribbean Community, of Cuba and of our Region.  It is against this historic background that we gather here to advance our relations in the interests of the peoples of our countries.