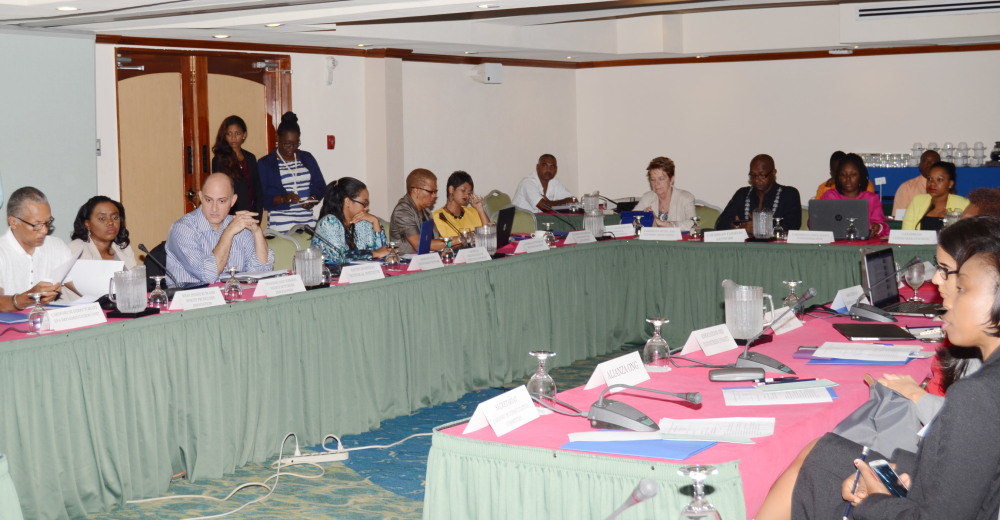 It is a real pleasure to be here with you today and deliver some opening remarks at this Preparatory meeting to the CARIFORUM Civil Society Consultative Committee.

The    text   of   the    EU-CARIFORUM   Economic   Partnership Agreement is extremely clear in reserving a fundamental role to the  Consultative  Committee.  The overall objective is to promote dialogue and ensure that the voice of the civil society gets loud and clear to the CARIFORUM -EU Council and the CARIFORUM - EU Trade and Development Committee. Civil society views shall be fully reflected into the decision making processes set up by the agreement – this is what the provisions under art. 232 of the EPA are aiming for.

From this perspective the EU-CARIFORUM EPA is a pioneering agreement  as civil society engagement is not only recognised but institutionalised. The discussion paper published in 2011 by the European Centre for Development Policy Management (ECDPM) puts emphasis on this innovative aspect of the agreement but at the same time shows the existence of a number of obstacles for the effective functioning of the Consultative Committee.

The ECDPM raised three matters in the discussion paper that I would like to refer to here. The first is the issue of representativeness: to what extent the Committee would be truly representative to  the  different interests of  the CARIFORUM Civil Society. The second is the question relating to the real capacity of organisations to participate substantively in the process. The third is the challenge represented by the absence of a coordinating mechanism for the participation of civil society at regional level under the CARICOM system.

The  second  issue,  the  one  about  the  capacity,  is  central.  It concerns the capacity of these networks to truly reflect views of        their   members   and   to   effectively   participate   in   the processes. Two levels to say the least: the preparatory work on the ground (above all I would stress), and then the capacity to interact effectively with the EPA structures. It is to address this issue that the EU has provided approximately 4 million euros in assistance to ILO, CPDC and Allianza under the Caribbean Regional Programmes.

The  last  issue  is  the  most  crucial.  The  need  of  civil  society participation goes over the boundaries of the EPA. The importance  of dialogue,  engagement  and  mutual understanding between different sectors of society goes much beyond the trade policy, and even economic issues all together. You are certainly not here only to fulfil trade agreement obligations.

However,  if  the  ECDPM  was  possibly  correct  in  saying  that CARICOM  lacked   an   institutionalised   framework   for   the participation of Civil Society in 2011, the political context is evolving quickly. In the CARICOM 5 Year Strategy Plan 2015-

2019  it  is  proposed  to  invite  the  Private  Sector  and  Civil Society in the Forum of the Secretary-General and Heads of Community Institutions which will coordinate the implementation of the Plan. Moreover, it is proposed to establish permanent arrangements for consultation with the regional representatives of private sector and civil society. These are all steps which go in the right direction.

As far as CARIFORUM is concerned, I found an article written by a well-known political analysis (David Jessop in the view from         Europe)   very    inspiring.    When   talking   about   the relationship between CARICOM and Dominical Republic the analysis stated that "beyond the high level steps now being taken (…), there is a strong case for establishing a much longer       term   approach   that   involves   people-to-people contact, visits, understanding, and day-to-day information flows in ways that encourage dialogue and normality between the Anglophone Caribbean and the Dominican Republic.

Contacts  with  civil  society,  dialogue,  synergies  can  foster political transformation, can push social progress, can make our society more just! The 20th of February this year occurs on a Saturday, so hopefully that day I won’t be giving public speeches, so I perhaps take this opportunity to remind that the UN General Assembly proclaimed 20 February as World Day of Social Justice, inviting Member States to devote the day to promoting national activities in accordance with the objectives and goals of the World Summit for Social Development. Observance of World Day of Social Justice should support efforts of the international community in poverty eradication,  the  promotion  of  full  employment  and  decent work, gender equity and access to social well-being and justice for all.

There is only one way to reflect all this into political agenda and to do it sustainably. This is through participation. And this is what this workshop is about.

I wish you a very fruitful meeting.