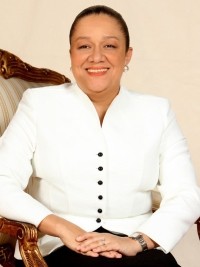 Monday on the occasion of World AIDS Day, Sophia Martelly, the First Lady of Haiti has issued a message of hope.

Message from Sophia Martelly :
"The World Day against AIDS is once again an opportunity to take stock of the HIV epidemic in Haiti and look it in the face, our achievements and challenges.

As First Lady of the Republic, I got involved from the start to make a plea for health in our country so that there is a real transformation.

I have to say that personally, my involvement in the response to HIV did not start today. Michel and me, we're still involved in youth awareness and prevention. This commitment was reinforced when I agreed to serve as Chair of the CCM Haiti [Multisectoral Coordinating Board]

Today I pay tribute to each initiative that allowed the most vulnerable groups to be affected by the various programs of prevention and care. I also want to make a posthumous tribute to Dr. Eddy Génécé, a pioneer in the fight against AIDS in our country who gave everything to the sector and people living with HIV in particular.

We are now at a turning point that leads us to the crossroads of three Zero (Zero new infections, zero stigma and zero death). More than ever, it proves important to act together to 'Bridging the Gap' and so put an end to AIDS by 2030.

Together, means that strategic decisions must be taken, based on the realities described by the direct and indirect beneficiaries of the programs.

Together implies that no aspect will be overlooked because all tend toward the objective ZERO.

ridging the gap would mean we no longer consider AIDS as a finality, but rather as a means of addressing the various socio-economic factors contributing to its spread !

A world without AIDS is possible, if we consent to address the real issues that affect the majority and that make them vulnerable, educational problems, health, empowerment.

A world without AIDS is possible, if our actions are inspired not by the desire to assert a presence but rather the mark it y the real will to change the lives of every individual.

A world without AIDS is possible if and only if all actors, whether national or international, play their part in the complementarity of strategies and taking account of the specific countries, populations, groups.

A world without AIDS is possible if and only if all actors, whether national or international, play their part in the complementarity of strategies and taking account of the specific countries, populations, groups.

Many challenges lie ahead, including the prevention of transmission from mother to child, universal access to treatment, prevention among youth aged 15 to 35 who make up over 50% of our population.

On the occasion of the World Day against AIDS, while renewing my commitment to continue my plea for the elimination of mother to child transmission, I invite all stakeholders to focus their efforts on the aspect human."

For her part, Dr. Florence D. Guillaume, Minister of Public Health and Population is more nuanced recalling "We could put 60,000 more people on treatment with as support structures 173 voluntary testing centers, 141 centers of mother to child transmission prevention and 137 treatment centers to antiretrovirals.


If we have some control of this epidemic, we can not yet claim victory because despite all interventions made and planned for an effective response to HIV, the figures of projections show that in 2015 the number of PLWHA will increase from 146.321 to 147.294, what's n practical terms means that we should question our individual and collective responsibilities. We should learn to respect our commitments, to respect the values and beliefs on the rights of all, to encourage the inclusion of all to achieve to a single health system and more sustainable actions for the advancement of the fight against AIDS in Haiti."