Citation in honour of Ms. Shirley Lee Pryce on the occasion of the Presentation of the Twelfth CARICOM Triennial Award for Women 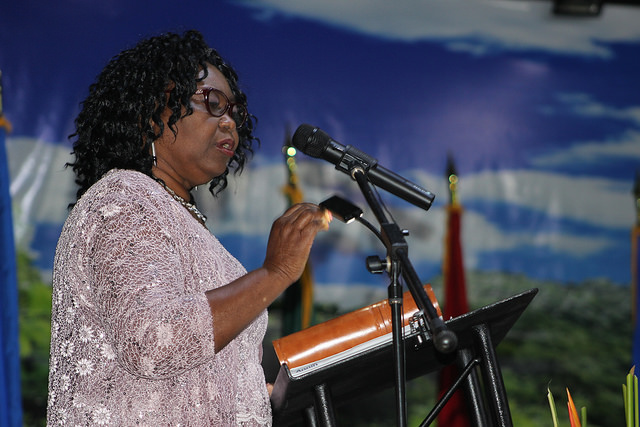 ON THE OCCASION OF THE PRESENTATION OF THE TWELFTH

AT THE OPENING CEREMONY OF THE THIRTY-EIGHTH MEETING

OF THE CONFERENCE OF HEADS OF GOVERNMENT

OF THE CARIBBEAN COMMUNITY

Shirley Lee Pryce is a remarkable woman, Jamaican by birth and today, a true Caribbean and global citizen by virtue of her passion and advocacy for a cause which is very personal to her, and which touches the lives of so many women in Jamaica, the Caribbean Community and beyond. She has distinguished herself through her advocacy for women’s rights and empowerment and in particular, the rights of domestic workers at national, regional and international levels.

The impetus for Shirley Pryce’s activism in this area was born of her own experience as a domestic worker for over three decades, where she experienced firsthand, the hardships related to poor wages, long hours, unfair working conditions and where she was not spared the abuse often meted out to women working in these circumstances. She was strong in her resolve to make a difference in the lives of so many women who face similar challenges daily and over the past two decades and more, has been voluntarily championing the empowerment and rights of domestic workers around the globe.

Her formal journey in such activism began with her role as a founder of the Jamaica Household Workers Association in 1991, an Association which in 2013, was reclassified as the Jamaica Household Worker’s Union through her advocacy. She is the current President of that Union.  She blossomed as an activist for women’s rights over the years as she transcended national boundaries to become a founding Member of the Caribbean Domestic Workers Network, of which she is the current Chair; founder of the Antigua Domestic Workers’ Association and a founding member of the International Domestic Worker Federation, in which she now holds an executive position. Under her leadership, the Membership of the Jamaica Household Workers Union has grown from 175 to 5,700 members and now comprises 13 branches across the Island.

Hers became an international voice in the area of women’s rights when she participated as one of two Caribbean representatives in the International Labor Conference in 2011 to develop and adopt the Landmark ILO Domestic Workers Convention 189. She was one of the persons influential in getting the Convention on the ILO Agenda and together with women’s organisations from across the globe, lobbied 183 countries for decent work for domestic workers. This is said to have resulted in her being dubbed Jamaica’s “hard talking no nonsense advocate” across Europe.

Convention 189 came into force in September 2013, extending basic labour rights to domestic workers around the globe.  She was active in following up with several CARICOM Heads of Government, encouraging them to sign and ratify the Agreement. Her advocacy led to Guyana becoming the first CARICOM Member to sign the Convention.  On the occasion of his signing of the Agreement, Jamaica’s Prime Minister, the Hon. Andrew Holness acknowledged Ms Pryce’s instrumentality in Jamaica’s timely action.

Our awardee continues to be an advocate on women’s issues at the United Nations. She was a member of the Jamaica Non-Governmental Organization (NGO) team which wrote and presented at the United Nations in New York in July 2012, the NGO alternative report on CEDAW, The Convention on the Elimination of all Forms of Discrimination Against Women. Over the period 2013 – 2016, she was a member of the Jamaica delegation to the annual sessions of the Commission on the Status of Women (CSW) held at the United Nations, New York, where she has spoken on numerous panels on such topics such as “Women’s Rights, Women’s Economic Empowerment” and “Best Practices” in Jamaica and the wider Caribbean. She is now a much sought after motivational speaker on women’s rights and most recently, in May of this year, accepted an invitation from the Nobel Peace Prize Women’s initiative to participate in their Conference in Germany.

Shirley Pryce recognized the value of personal capacity building, and in particular, the importance of equipping herself with the knowledge and skills required for the path she had chosen. She strove against the odds to pursue a degree programme in Social Work at the Jamaica Theological Seminary, attending classes in the evening, and was admitted to the Degree of Bachelor of Arts in Social Work in 2011.  This was not to be the end of academic pursuits for Shirley.  In 2013, after delivering a riveting speech on workers’ rights at Penn State University in Pennsylvania, USA, she was immediately offered a full scholarship to pursue a Masters degree.  Shirley completed her studies and was awarded a Masters in Professional Studies (Labor & Global Workers’ Rights) in 2016. She has been using her new knowledge to empower many women who would not normally have a 'voice'.

Ms Pryce currently serves at the National Housing Trust, Jamaica, as a social worker and in that capacity, engages with several inner-city communities, paying specific attention to ensuring that children and youth take advantage of the education and other self- development opportunities available to them. She has continued to focus her efforts on educating domestic workers in Jamaica about their rights to decent employment, through awareness and capacity building workshops for both domestic workers and employers, in order to, (in her own words) ‘empower them, raise their standard of living, elevate their dignity and help reduce poverty’. Her efforts at capacity building have also focused on building specific skills that can lead to economic empowerment. In 2006 she opened a school in Denham Town, named “Hospitality Skills for Life” where residents benefit from classes in food preparation and cake baking and decorating. She has also worked in several Caribbean countries, in collaboration with the Caribbean Policy Development Centre (CPDC) Barbados, educating domestic workers on leveraging opportunities in the CARICOM Single Market and Economy (CSME).

Shirley Pryce has also prioritised the empowerment of both youth and adults in her own home community in Rocky Point, Clarendon. She is an active Member of the Braeton New Testament Church of God, where she is a pillar of the women’s Ministry. Ms Pryce is the mother of two adult children, a son and a daughter, who are proud to be with her today to celebrate yet another memorable event in her life; and she has also been a foster mother to seven others.

She serves on several Boards nationally and internationally, including AWID – the Association for Women’s Rights and Development which is one of the largest international organisations for women’s rights across the world; as well as The Association of Women’s Organisations in Jamaica and the Civil Society Advisory Group to UN Women, Caribbean, on Gender in the Caribbean.

It should come as no surprise that Ms Pryce has been the recipient of several awards for her sterling and selfless service to ensuring the empowerment of women. Among these are:

The Jamaica Bureau of Women’s Affairs Award for outstanding contribution in sensitizing the public on Gender Based violence in Jamaica (2009);

Jamaica National Honours - Order of Distinction (Officer Class) for outstanding contribution in working with domestic workers in the Caribbean (2015).

We can look forward with great anticipation to Shirley Pryce’s first book, ‘Woman on Fire’ now in its initial stages of preparation!

For her outstanding contribution in Trade Unionism and Women and Development in Jamaica, CARICOM and beyond, it is with great pleasure that the Caribbean Community now invites Ms. Shirley Lee Pryce, exceptional leader and advocate; champion of domestic workers’ rights; dedicated social worker; and distinguished daughter of the Caribbean, to accept the Twelfth CARICOM Triennial Award for Women.