Address by Brigadier David Granger, MSS President of the Cooperative Republic of Guyana at the Opening of the Thirty–Sixth Regular Meeting of the Conference of Heads of Government of the Caribbean Community, Bridgetown, Barbados 2 JULY 2014 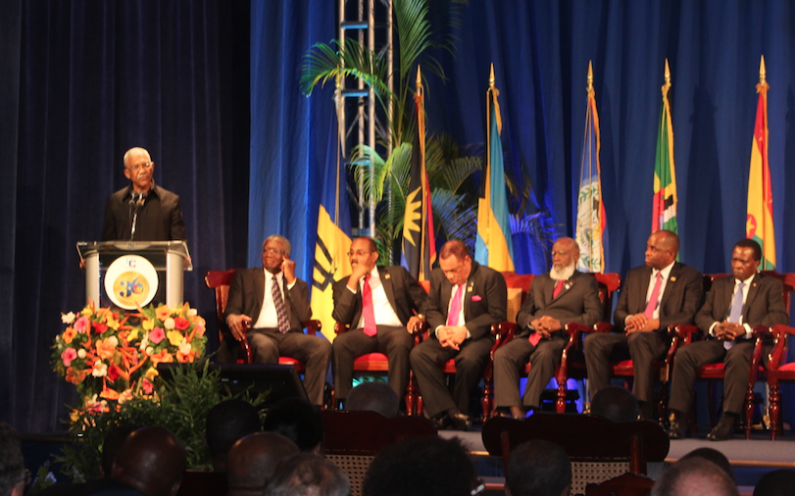 I am honoured to join fellow Heads of Government here in beautiful Barbados at this Thirty-Sixth Regular Meeting of the Conference of Heads of Government of the Caribbean Community.  We wish to record our gratitude to our host, Prime Minister Freundel Stuart, to the government and to the friendly people of this island, for the gracious welcome extended to our delegation and for the excellent arrangements made for this Conference.

I am happy to address this Conference this evening, just seven weeks into my tenure as President of Guyana following the election on May 11, 2015.  We publicly applaud the valued contribution made by the various electoral missions, including the CARICOM Electoral Observer Mission, to validating the democratic process in our country. The election results were not a victory. They were an opportunity to establish a government of national unity and to create the inclusionary democracy which our national constitution prescribes.

We share the passion for the twin virtues of National Independence and Regional Integration which inspired our founding fathers to embark on a path that has brought us together today. That is the path that led to the origins of the Caribbean Community fifty years ago. Those virtues and values are as relevant now as they were then. They will continue to guide us for generations to come.

It was right here that it all started.  Fifty years ago on 4th July, 1965, Antigua’s Vere Bird, Barbados’s Errol Barrow and Guyana’s Forbes Burnham — three busy ‘Bs’ — met here in Bridgetown.  Their intuition and initiative led, five months later, to Dickenson Bay which led to the establishment of the Caribbean Free Trade Association which in turn led to Chaguaramas and the creation of the Caribbean Community on 4th July 1973. The rest is history.

None of the three countries was as yet Independent in 1965 but the Premiers knew the value of Independence.  None belonged to any formal federation, but they understood the need for integration. Here we are today, their heirs and successors, with a mandate,

a mission, to preserve that ‘independence’ and protect that ‘integration’ against the danger of domination and disintegration.

We are committed to continue the process of actualising the aspirations of our visionary founders to bring real independence, real integration and real happiness to our peoples.

We are committed to ensure that every effort is made to eradicate inequality and poverty.

We will not be able to attain the level of development needed to lift our people out of poverty, however, unless we are able to exploit our bountiful natural resources and employ the human talents of our resourceful people.

The task facing the Community today is to reaffirm its collective support for the principles enshrined in international law for safeguarding our territorial integrity and sovereignty and our national independence and in our charters and agreements for deepening the integration of our Community.

Guyana, even as it approaches the 50th anniversary of its independence next year, hand in hand with its sister Barbados, is still carrying a ‘monkey on its back.’   That monkey, is the unbearable burden of an oppressive and obnoxious claim on our land and sea space.

CARICOM has been a source of solace and steadfast support and for Guyana’s territorial integrity and sovereignty over the years.  We never needed that support more.

Guyana has borne the brunt of having funding for a major hydro-electricity project blocked; of having investors intimidated; of having its citizens in border areas harassed and of having petroleum exploration vessels expelled and seized by gunboats.

Guyana’s border with Venezuela was fixed is 116 years ago.  It was determined, defined, delineated and demarcated by international arbitration. Maps were drawn. Atlases were adjusted. Border markers were cast in stone. Any state that systematically, cynically and

sedulously seeks to repudiate solemn international agreements and to undermine the security and sovereignty of another state must be condemned.  Our national boundaries have been recognised internationally.

Venezuela over the past 50 years, alas, has become regressive and even more aggressive.  That country continues to threaten the development of Guyana, a CARICOM member state, both on land and at sea.  That country, mindful, of its superior wealth and military and naval strength – and unmindful of the plight of the poor people of one of the world’s smallest and least populated states – has again resorted  to intimidation and the threat of the use of force.

Guyana seeks the support of its sister states in the Caribbean Community. We clamour for the succour of the Commonwealth. We yearn for the security of the United Nations  and the shelter of international law to bring a peaceful end to Venezuela’s rejection of the validity of a boundary which has been defined as a ‘full, perfect and final’ settlement and which all parties, at that time, vowed to accept and respect for all time.

Naval superiority cannot be allowed to supplant the supremacy of the law.  Gunboat diplomacy has no place in the 21st century Caribbean and must be condemned where ever it occurs.

CARICOM is a rich storehouse of shared experiences in our struggle for independence and integration.   Without the cooperation of our CARICOM member states, we risk being miniaturised and marginalized and our efforts to improve our economies could be trivialized.  We might be a community of small states but we deserve and demand to be treated as equals among the nations of the world.  Let us not be afraid to re-engage the rest of the hemisphere as a natural family; as natural allies and as a force for peace and international law.

CARICOM member states have assembled here today conscious of the reality that we are part of the international community that is characterized by unequal relations of power and exchange.  We are powerless as individual states, to alter these asymmetric relations.  We are powerful as a community of sovereign states, speaking with a united voice, to adopt an attitude and to gain amplitude in order to influence the global agenda and resolve the many issues that confront small states.

We have already demonstrated the capacity to collaborate to confront some of the most challenging transnational threats.  These threats have demanded that we increasingly seek regional rather than purely national responses.  They form the basis of regional cooperation. Transnational threats, formidable as they are, pale in significance to a much more portentous threat - the threat to our territory, the very land and sea space on which we rely for our everyday existence.

Our exclusive economic zones are integral to our national territory. They are essential to our survival because we depend on these waters for our economic sustenance — travel, trade, tourism, fishing and petroleum exploitation.

We were forewarned about this danger. President of Mexico, Vicente Fox, speaking to the twenty-second meeting of the Conference of the Heads of the Government of the Caribbean Community (CARICOM) in The Bahamas in 2001, then noted that “More than half of the maritime border lines, which involve at least 24 pairs of different states with adjacent of facing coastlines, have yet to be agreed upon.”

Our maritime zones are of economic and strategic importance not just for us, but for others who seek to assert their superiority over others.    These waters are our common patrimony; they are ours to possess, ours to protect, ours to bequeath to posterity.  We must remove any potential sources of conflict among our member states by ensuring the process of maritime delimitation in accordance with the international Law of the Sea.

We must be prepared also to exercise absolute sovereignty over our maritime waters and resources.  We must protect these resources from being invaded and annexed.   We must pursue the principle of collective security which provides that a threat to any of our members represents a threat to our entire community.

Guyana faces such a threat. Decree No 1787, promulgated by the Bolivarian Republic of Venezuela, was timed to coincide with Guyana’s Independence Day on 26th May and the actual day of my inauguration as President of my country. The Decree lays claim to much of the coastline and most of the exclusive economic zone of Guyana.  This Decree has dire implications for the entire Region but most particularly, the eastern tier of states – Barbados, Grenada, Guyana, Suriname and Trinidad and Tobago.

We consider the issuance of the Decree by Venezuela as an act of aggression against Guyana’s sovereignty.  It is an assault on our right to access and to develop our maritime resources.  We ask this Conference to affirm its solidarity with Guyana to repudiate this Decree.

It is my sincere hope that the discussions which will follow this magnificent opening ceremony will be a manifestation of our faith in integration and an indication of the fact that the best days for the Region are yet ahead.  This is an auspicious year, time and place to renew our commitment to the ideals of our founding fathers. This is the occasion – the Bridgetown moment -  to remind ourselves of CARICOM’s vision and founding principles and give our peoples the fruits of Independence and Integration —that they all deserve.