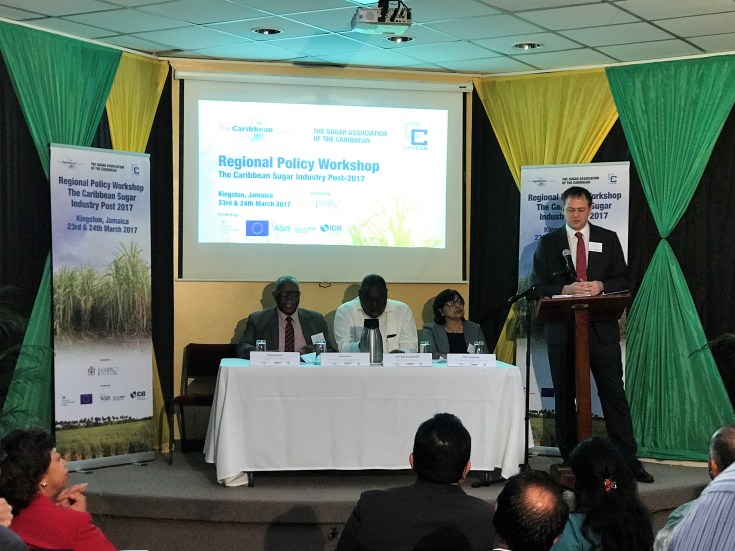 The ability of sugar industry in the Region to survive after the removal of production quotas in the European Union (EU) on September 30, 2017, will depend on improved competitiveness and pragmatic diversification options, according to a Caribbean Community (CARICOM) Secretariat official.The end of EU’s quota management for sugar is expected to lead to a fall in prices towards the international sugar price and a decrease in sugar imports from the African Caribbean and Pacific (ACP) states, with particular impact on Caribbean producers.

In an address on 23 March to the opening of a Regional Policy Workshop in Kingston, Jamaica, that addressed the Caribbean Sugar Industry Post-2017, CARICOM Secretariat Programme Manager, Agriculture and Industry. Ms. Nisa Surujbally, said that securing more remunerative markets, value addition and an enabling policy regime within the CARICOM Single Market and Economy (CSME) were also very important to the industry’s survival.

“We have witnessed major structural changes in the operations of our sugar industries, including the exit from sugar production of two Member States, Trinidad and Tobago and St Kitts and Nevis. Nevertheless, we are mindful of the vital role and contribution of the sugar sectors to the economies of Barbados, Belize, Guyana and Jamaica. Survivability of these industries, after the removal of production quotas in the EU on September 30 2017, will in no small measure be a function of improved competitiveness, securing more remunerative markets, value addition, an enabling policy regime within the CARICOM Single Market and Economy, and, not lastly, practical and pragmatic diversification options.

“I say this as a technical official while being acutely aware of the emotional associations we have with our Region’s oldest economic sector. This industry is responsible for us being here and has coloured our history from colonisation, to slavery to indentureship and to independence. It is not an easy time! Now is crunch time”, she told the gathering.

The workshop was convened by the Sugar Association of the Caribbean and hosted at JAMPRO with the advice and support of The Caribbean Council, the CARICOM Secretariat and JAMPRO. It was funded by the EU, United Kingdom Foreign and Commonwealth Office, ASR Group, and the Inter-American Development Bank (IDB). The workshop brought together industry leaders and policy-makers to inform and facilitate an in-depth discussion of how the Caribbean sugar industry now needs to adapt to the new market realities and the policy options which are available to both industry and regional governments.

The sessions focused on an outlook of the global sugar market and sugar prices; the 2017 EU sugar reform and short-term threats to the Caribbean sugar industry; access to new markets and opportunities; increasing productivity and competitiveness; managing the politics of transforming sugar industries; and adapting to climate change. There were also panel discussions that explored the trade and tariff policy options that are open to Caribbean policy-makers, as well as the policy measures that Caribbean policy-makers could adopt to support a viable sugar industry.

Ms. Surujbally gave the assurance of the Secretariat’s continued support to the sugar industry of CARICOM through its active participation in the dialogue and framing of the policy options for decision-makers.The CARICOM Secretariat has a longstanding relationship with the SAC which established in the 1930s. SAC is an accredited organisation at meetings of the Council of Trade and Economic Development (COTED) and has regularly brought recommendations to the Ministers of Agriculture and Trade for decision-making. The Secretariat, Ms. Surujbally pointed out, also participates in SAC meetings, and through this close association has facilitated the regional sugar industry in resolving several matters.

Ministers responsible for sugar met  for their Sixth Meeting of CARICOM Stakeholders in Sugar a day after the policy workshop and discussed its key outcomes.