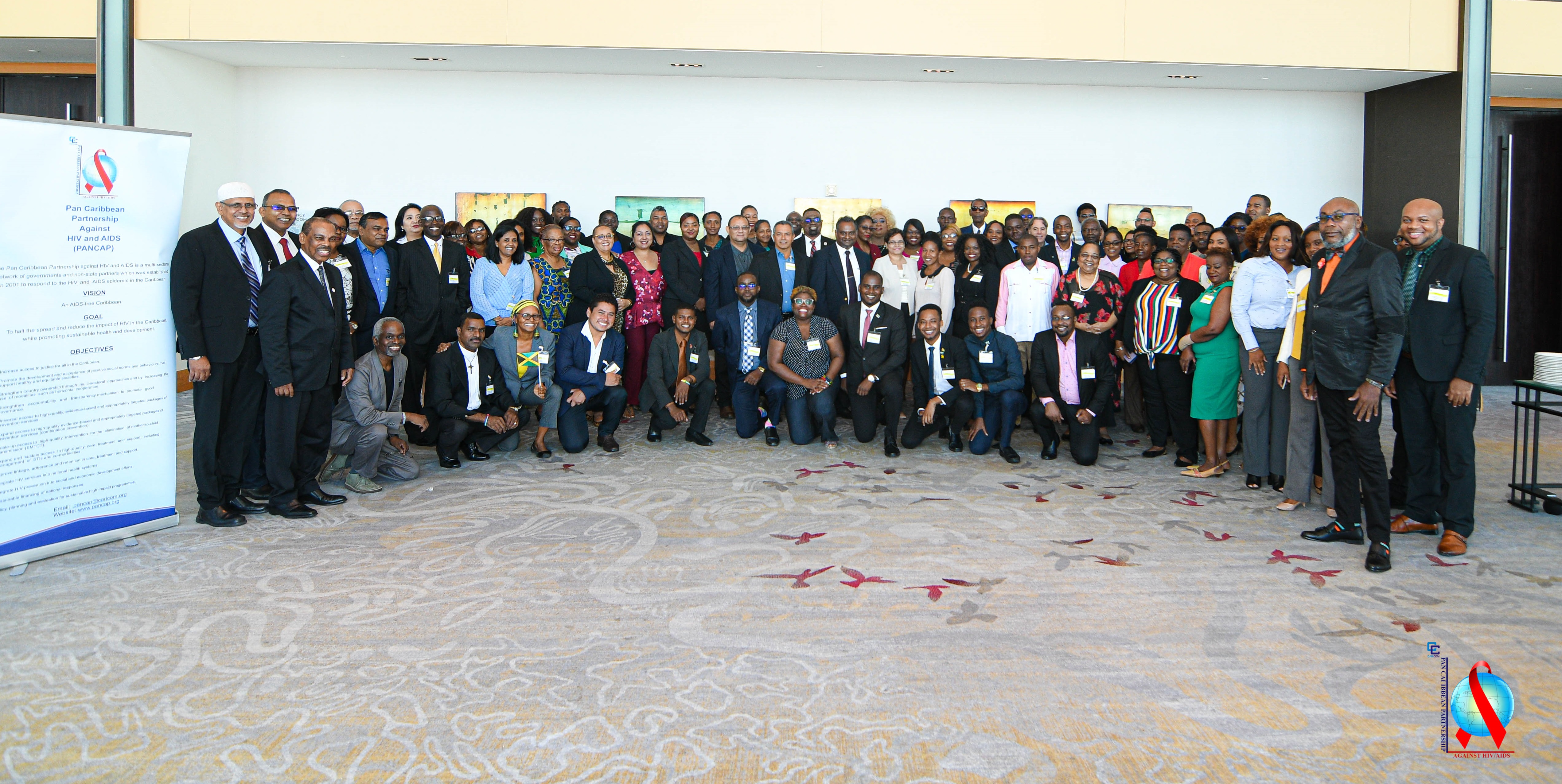 Mr Ramdahin emphasised that as the 2020 juncture for reporting on how each country and the region, as a whole, would have performed regarding the 2020 targets set by UNAIDS, assessing progress with responses to date in combatting HIV and AIDS is of paramount importance.  He noted this will highlight and influence the adjustments required to chart the new roadmap for guiding the level of scale-up necessary for achieving the more significant target of “Ending AIDS by 2030.”

The permanent secretary praised PANCAP for the concerted effort in mobilising and engaging the key stakeholders comprising Parliamentarians, Faith Leaders, Civil Society Leaders, National AIDS Programme (NAP) Managers and Youth Leaders.  He stated that these stakeholders have important and influential roles in determining how we protect those who are most vulnerable to HIV; and care, treat and respect those who are living with HIV and AIDS.  “I must commend PANCAP for establishing the mechanisms for monitoring the arrangements in place for responding to the HIV disease, which allows us to gauge and report on the progress to date,” stated Mr Ramdahin, “Through PANCAP’s sustained efforts, we are able to identify and re-evaluate the areas in need of redress or further collaboration, and ensure that there is ongoing follow-up action”.

Mr Ramdahin further stated that “in aiming for our target of an AIDS-free world by 2030, where new infections are almost negligible, we must remember at the heart of this global campaign is the “protection of the dignity of Human Rights”, which is critical for attaining our Sustainable Development Goals (SDGs)”.

He noted that geopolitical instability, escalating impacts of climate change and unanticipated financial hurdles are impacting negatively to cause shifting of the disease burden and straining the Region’s ability to mobilize the much-needed resources to mount an effective response.  “We can all agree that if we are to collectively work together towards the goal of ending AIDS by 2030, introspection at the ‘individual and regional governance levels’ are necessary for fostering ‘greater collaboration’ among all stakeholders”, stated Mr Ramdahin.

He further emphasised that in achieving this state of “greater collaboration”, it is incumbent that part of the focus of the Second regional dialogue must be centred around conversations that are geared towards aligning synergies for creating a more diversely inclusive environment that is free of biases, mistrust, phobias, stigma and discrimination, especially at the national and regional levels, where we can more efficiently identify tools and strategies to augment “communication and collaboration” of a richer and deeper quality.

“Today’s forum represents a great opportunity for individuals and their organizations to network and examine societal norms, attitudes and value systems that manifest as communication barriers, which ultimately impede the HIV and AIDS response at the national and regional levels,” stated the permanent secretary, “based on my experience, I would have learnt that the key to the success of any response, be it an oil spill response, natural disaster response or a response to an epidemic such as HIV is rooted in the people who inspire, shape, drive and manoeuvre the response. People are the main determinants in any response and can either make it or break it”.

He reminded the participants that they are the ones who have been empowered to determine the fate of the region as it pertains to HIV and AIDS.  He urged stakeholders to rise to their call of duty and make meaningful contributions for ensuring the removal of all of the barriers for achieving the goal of ending AIDS by 2030.

He stated, “Please be cautioned that if we fail to unmask or decode the barriers because of our personal biases on human rights, the net result will be that we will fail to effectively strategize and fail to meet the diverse needs of our vulnerable groups within the landscape of the response”.

The permanent secretary warned that if key populations vulnerable to HIV are allowed to go unchecked, untreated and unsupported in any country, then society as a whole will ultimately suffer. He stated that the region recognises that HIV and AIDS are a critical development problem which affects the quality of life, labour, families, communities and the national economy - in the present and future. “We do not want to be in this state, so let us all work together for the common good of humanity”, stated Mr Ramdahin.

He further emphasised that the Region can rest assured that the improvements expressed and gains achieved thus far, as well as the forthcoming recommendations, will not only serve to foster an efficient and sustained response to HIV and AIDS within the region but also contribute to other areas that impact on communities’ health and wellbeing.

He challenged participants to take a deep insightful look at the PANCAP’s Justice-For-All programme, which encompasses the adoption of the CARICOM Model Anti-Discrimination Legislation 2012; give due consideration to recommendations that will improve the mechanisms for enhanced inter-regional collaboration within CARICOM member States; and take into consideration the targets established by the United Nations High-Level Meeting Political Declaration June 2016 on ending the AIDS epidemic by 2030; the 2030 Sustainable Development Goals (SDGs) approved by 192 nations at the United Nations in September 2015; and the commitments made by  civil society, faith-based and other implementing stakeholder groups.

“Despite the successes to date, let us not become complacent or despondent about the world economic and financial downturns. We are here on a mission and tasked with ascertaining “innovative ways” for addressing how to sustain our responses for ending HIV and AIDS by 2030” stated Mr Ramdahin.

He further stated that the future goal of ending AIDS by 2030 is achievable and will only be sustained through the collective efforts of Parliamentarians, Faith Leaders, Civil Society Leaders, Youth and National AIDS Programme (NAP) Managers working in harmony to ensure open, honest and consistent dialogue and collaboration to unlock and overcome the barriers for achieving our regional and international goals.

“In making your respective contributions at this second Regional Dialogue, please be guided by CARICOM’s Vision statement which proposes a “Caribbean Community that is integrated, inclusive and resilient; driven by knowledge, excellence, innovation and productivity; a Community where every citizen is secure and has the opportunity to realise his or her potential with guaranteed human rights and social justice; and contributes to, and shares in, its economic, social and cultural prosperity; a Community which is a unified and competitive force in the global arena,” stated Mr Mr Ramdahin.

He advised that a vision is needed to start the process of charting the course and invited stakeholders to keep this vision in mind as they deliberate on the joint National and Regional Level Policy Formulation and Activities for advancing the short, medium and long term goals of the PANCAP’s Justice For All Roadmap.

“Despite the obstacles and challenges currently faced by many countries in the region, I would like to re-affirm Trinidad and Tobago’s commitment towards establishing an enabling environment for meeting the 90-90-90 Targets in 2020 and continued support for programmatic activities thereafter for ending the AIDS epidemic by 2030,” stated the PS.

He highlighted that the Second Dialogue represents yet another step in the way forward for laying the foundations for increasing engagement and promoting solidarity among stakeholder groups and the persons we serve.

Mr Ramdahin thanked the stakeholders for their unwavering commitment and engagement in the regional dialogue. He stated “the journey of a thousand miles begins with one step.  Let us wisely deliberate to strategise our next steps to determine the response tools and mechanisms for achieving the desired results.  I truly believe that an AIDS-free generation is certainly within our reach, but we must remain loyal and work in tandem with PANCAP to achieve the goals set before us”.

The Director noted that the stakeholders of the first regional dialogue held in April 2018 provided recommendations including the need to create guidelines for respectful dialogue between key populations leaders and faith leaders.  In response, PANCAP prepared general principles designed to assist and support respectful dialogue between and among stakeholders, especially in cases where discussions are centered on sensitive and controversial issues. These include discussions that may involve social, cultural and doctrinal issues in conflict with each other.

Another recommendation from the first dialogue was the review and revision of the PANCAP Justice for all (JFA) Roadmap (2014) in light of developments over the last five years.  In response, PANCAP, with inputs from various stakeholders’ dialogue, revised the JFA Roadmap

The Director of PANCAP also highlighted that during the 2018 meeting, faith leaders indicated that they could not endorse the UNESCO Comprehensive Sexuality Education (CSE) models since they were unfamiliar with them.  To improve their understanding, PANCAP developed nine infographics which illustrate the key components of the CSE models.

The Director further explained that the Second Regional Dialogue is positioned within the new Caribbean Regional Strategic Framework on HIV and AIDS (CRSF) 2019 – 2025. He emphasised that the CRSF articulates the vision, goals, objectives, strategic priorities and key strategies which will guide the Region’s HIV response over the next six years.  “We are moving closer to ending AIDS, so we need all hands on deck,” stated Mr Springer, “With that in mind, we are required to be bold and innovative as reflected by the strategies within the CRSF 2019-2025.

The meeting applauded the Director’s announcement of the award of the US$6,500.00 for the Multi-country Caribbean grant for PANCAP, the Caribbean Vulnerable Communities Coalition (CVC) and the Centro de Orientación e Investigación Integral (COIN) by the Global Fund to Fight AIDS, Tuberculosis and Malaria from October 2019 to September 2022. He noted that the new grant is unique since it is a joint PANCAP-CVC-COIN collaboration.  “The Grant is a demonstration of the collaboration between Governments and civil society partners,” stated Mr Springer, “it illustrates the critical need for us to ensure that we position civil society as key partners within the HIV response”.

Dr John Waters, Programme Manager, CVC delivered remarks on behalf Mr Ivanhoe Cruikshank, Executive Director, CVC.  He briefly reflected on the progress made on documenting human rights abuses.  He stated that this has been a priority of CVC and its partners since human rights abuses involving vulnerable groups are not given the attention they deserve. He highlighted that CVC has developed the Shared Incident Database (SID) for systematically documenting abuses and has provided the impetus for vulnerable groups to report and speak out against stigma and discrimination.

Dr Waters explained that CVC currently has in excess of 40 civil society partners registered with SID that are documenting human rights abuses throughout the Region.  He also highlighted CVC’s dedicated team of community paralegals who were trained to assist in the documentation of human rights abuse cases.  Dr Waters also highlighted that CVC has created a cohort of human rights lawyers who champion cases involving vulnerable groups and discrimination. He emphasised that these initiatives have resulted in progress with regard to CVC’s engagement with policymakers and Governments.  He stated, “We are beginning to see some tangible results in achieving justice for all”.

PANCAP is a Caribbean regional partnership of governments, regional civil society organisations, regional institutions and organisations, bilateral and multilateral agencies and contributing donor partners which was established on 14 February 2001. PANCAP provides a structured and unified approach to the Caribbean’s response to the HIV epidemic, coordinates the response through the Caribbean Regional Strategic Framework on HIV and AIDS to maximise efficient use of resources and increase impact, mobilises resources and build capacity of partners.

What are the Joint United Nations Programme on HIV/AIDS (UNAIDS) 90-90-90 Targets?