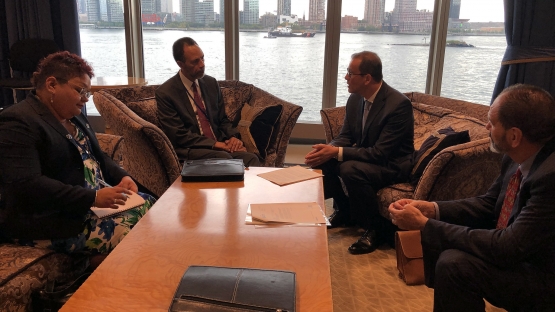 Small Island Developing States, often referred to as SIDS, the United Nations Sustainable Development Goals and how the IAEA can help in these areas were the main topics of discussion during IAEA Acting Director General Cornel Feruta’s visit to New York this week.

Today, he attended the High-Level Meeting to review progress made in addressing SIDS priorities through the implementation of the SIDS Accelerated Modalities of Action (SAMOA) Pathway.

“Partnerships are a vital component of our work to support SIDS,” Mr Feruta said after the meeting. “We believe that it is only by working together that we can achieve lasting impact, at scale, and increase the resilience of societies and economies in SIDS.”

The IAEA supports an increasing number of SIDS Member States in the Caribbean, the Pacific and Africa through technical cooperation projects, responding to the priorities set forth in the SAMOA Pathway, he added, providing a few examples.

In the Pacific region, Mr Feruta said, the IAEA is working with academic, scientific, bilateral and multilateral partners to leverage collaborative arrangements and support core national human resource and institutional capacities to increase resilience in the Pacific societies and economies.

“We look forward to continuing to pursue viable partnerships to further amplify the reach of nuclear science and technology in the SIDS,” Mr Feruta said.

“Poverty, hunger, human health, clean water, affordable and clean energy, industry and innovation, and climate change are areas in which the IAEA has been working for over 60 years,” he commented. “The use of nuclear science and technology contributes directly to nine of the 17 SDGs.”

The Agency also assists its Member States in fostering the efficient and safe use of nuclear power, prompting access to energy (SDG 7), improving industrial production and safety using nuclear technologies (SDG 9), contributing to both climate change mitigation and adaptation (SDG 13) and training scientists in the use of nuclear techniques to monitor and manage the marine environment (SDG 14).

IAEA activities also support the use of isotopic techniques to reverse land degradation and restore soils (SDG 15). Lastly, through its work, the Agency facilitates technology transfer through partnerships with its Member States and other international organizations (SDG 17).

Click here to learn more about how the IAEA contributes to the SDGs.

On the sidelines of the meetings, Mr Feruta held high-level discussions with high-ranking officials from several countries, as well as representatives of regional organizations, such as CARICOM, the Caribbean Community. Mr Feruta also met Under-Secretary-General of the United Nations Office of Counter-Terrorism Vladimir Voronkov and Under-Secretary-General and High Representative for Disarmament Affairs Izumi Nakamitsu.