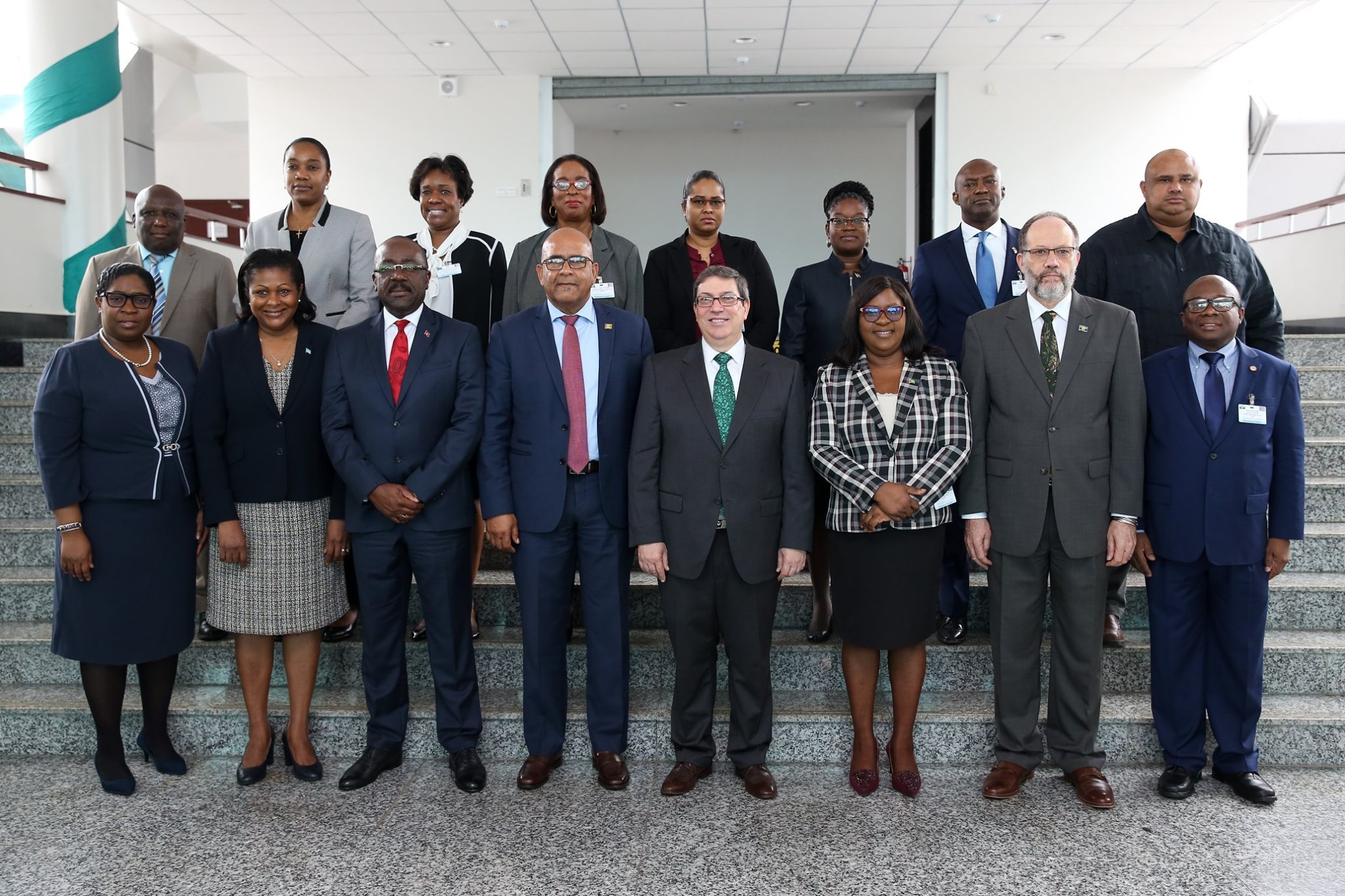 We, the Ministers of Foreign Affairs of the Caribbean Community (CARICOM) and the Republic of Cuba, having met in Georgetown, Guyana, on June 14th, 2019, on the occasion of the Sixth CARICOM-Cuba Ministerial Meeting.

Recalling the Summit Declarations of Havana 2002, Bridgetown 2005, Santiago de Cuba 2008, Port of Spain 2011, Havana 2014 and St. Mary’s 2017; as well as the periodic meetings of the Ministers of Foreign Affairs of CARICOM and Cuba; and highlighting their indisputable contribution to the advancement of our political links and cooperation, materialized in the high level reached by the relations between our nations;

Recognizing the need to collectively address the challenges to sustainable development, including our vulnerabilities as Caribbean countries, especially in the economic and environmental areas, and in particular as Small Island and low-lying coastal Developing States, in order to build just, inclusive and equitable societies;

Concerned by the loss of life and the extensive economic and infrastructure damage caused by the passage of frequent and intensive hurricanes in the Caribbean region, and the negative effect of natural disasters on our development processes;

Affirming that the Caribbean is an inseparable part of Our America, and highlighting the role of CARICOM in the regional integration process;

Reaffirming the importance of the Community of Latin American and Caribbean States (CELAC) as a mechanism for political consultation and promotion of the unity and integration of our region;

Determined to continue to strengthen the CARICOM-Cuba mechanism, based on deep historical roots and founded on solidarity, cooperation and complementarity:

1. Reiterate that the unity and integration of our Caribbean Region is based on unrestricted respect and full adhesion to the Purposes and Principles enshrined in the United Nations Charter and International Law, in particular the respect for sovereignty, territorial integrity and non-interference in the internal affairs of States, the peaceful settlement of disputes and the prohibition of the threat or use of force. Also, reaffirm our commitment to the protection and promotion of all human rights for all;

2. Emphasize the importance of defending regional unity to preserve the peace and stability of our countries;

3. Reaffirm our solidarity with the Republic of Haiti, for which we feel a historic debt of gratitude, and a commitment to continue fostering cooperation with that nation, in accordance with the priorities defined by its government and in full respect of its sovereignty;

4. Call on the international community, in its relations with the countries of the Community of Latin American and Caribbean States (CELAC), to endorse the tenets of the Proclamation of Latin America and the Caribbean as a Zone of Peace, signed in Havana in January 2014, and that recognizes, among others, the inalienable right of every State to choose its political, economic, social and cultural system as an essential condition to ensure peaceful coexistence among nations.

5. Reject the imposition of unilateral coercive measures and, in that context, call for an immediate and unconditional end to the economic, commercial and financial embargo imposed by the government of the United States of America against Cuba and, especially, to its extraterritorial nature and the financial persecution of Cuban transactions, whose severity has increased. In this regard, we denounce the application of the new measures under Title III of the Helms-Burton Act, legislation which flagrantly violates International Law and undermines the sovereignty and interests of third parties, announced by the US government which strengthens the US blockade against Cuba, including the application of laws and measures of extra-territorial nature that are contrary to international law. Furthermore, we reiterate our endorsement of the principles of international law as well as our strongly-held view that economic development and stability in the Caribbean region contribute to international peace and security;

6. Agree to continue implementing the results of the Summits of Heads of State and Government of CARICOM and the Republic of Cuba and the Meetings of Ministers of Foreign Affairs as a platform for closer political consultation and coordination in other areas;

7. Recognize the cooperation between CARICOM and Cuba in areas such as health, human resource development, construction, sports, and disaster risk reduction and mitigation has effectively contributed to the development and well-being of our peoples. In this regard, we reaffirm our commitment to continue promoting the implementation of projects to improve air and sea ports, infrastructure and connectivity between our countries and broaden our economic and trade relations through the implementation of the Revised Trade and Economic Cooperation Agreement between CARICOM and Cuba;

8. Commit to complete the required internal legal procedures with a view to giving effect to the Second Protocol to the Agreement on Trade and Economic Cooperation, which will contribute to the strengthening of trade relations;

9. Reiterate the importance of trade for the Region’s sustainable development and reaffirm the necessity of appropriate policy space and special and differential treatment for small vulnerable economies like those in the Caribbean. In that context, we welcome the hosting by Barbados of UNCTAD XV in October 2020, which will be the first time that an UNCTAD quadrennial conference has been held in a Caribbean country;

10. Reaffirm the need to continue strengthening cooperation and exchange of experiences and good practices in the area of integrated disaster risk management in the Caribbean, aiming to support the implementation of the Sendai Framework for Disaster Risk Reduction 2015-2030 and all its goals by the Caribbean countries; and thus to promote the substantial reduction of disaster risk and loss of life, livelihood and health, as well as economic, physical, social, cultural and environmental assets of people, enterprises, communities and countries;

11. Commit to continue cooperation in the areas of food security, nutrition and agricultural development including women empowerment and youth involvement, as key pillars in the fight against poverty, including actions for implementing the CELAC Plan for Food and Nutrition Security and the Eradication of Hunger 2025 (SAN-CELAC);

12. Reiterate our commitment to the protection and conservation of the environment and the sustainable use of natural resources in the region, particularly in the Caribbean Sea. Support its designation by the United Nations as a “Special Area in the Context of Sustainable Development” and support the mandate of the ACS Caribbean Sea Commission, to promote its preservation and sustainable use. In that regard, strongly condemn the continued use of the Caribbean Sea for transit and transshipment of nuclear material and toxic waste, and urge countries that produce and transport them to urgently implement appropriate measures to end such activities;

13. Reaffirm the commitment to promote regional energy integration as a relevant element for sustainable development and to advance the diversification of the energy matrix of our countries, oriented towards the use of clean, renewable and sustainable energy sources, and universal access to energy services that contribute to the well-being of our peoples; we also welcome the fruitful exchanges held between the Caribbean Center for Renewable Energy and Energetic Efficiency and Cuba;

14. Emphasize the urgent and global priority of climate change and its negative implications for our societies, ecosystems and economies. In this regard, commit to strengthening cooperation within CARICOM and with other international organizations and agencies to foster greater adaptation and mitigation, strengthen resilience and reduce our vulnerability, particularly Small Island and low-lying coastal Developing States;

15. Commit ourselves to continue promoting joint actions and exchanges of experience and information on security, as well as on prevention and confrontation of transnational organized crime, the worldwide drug problem, corruption, human trafficking and other new threats related to cyber security among others;

16. Recognize the promotion of sustainable tourism as one of the keys to economic growth in the Caribbean region, as identified in the Strategic Plan for the Caribbean Community 2015-2019, and agree to strengthen cooperation in this area, including multi-destination tourism;

17. Emphasize the importance of culture as a significant instrument in the advancement of sustainable economic development, unity, peace, education and mutual understanding between our people, and support a successful celebration of CARIFESTA XIV, to take place in Trinidad and Tobago on August 16 – 25, 2019;

18. Reaffirm our will to strengthen South-South cooperation as an expression of solidarity among our countries for the promotion of bilateral and regional programmes as well as triangular cooperation for development, taking into account the development priorities of our countries;

19. Agree to celebrate the Twenty-Fifth Anniversary of the establishment of the Association of Caribbean States (ACS) on 24 July 2019, recognizing the role it continues to play in advancing integration and sustainable development of the Greater Caribbean, through active collaboration in the focused areas of disaster risk reduction, sustainable tourism including multi-destination, trade, sustainable development and protection of the Caribbean Sea and transportation;

20. Reaffirm that the preservation and consolidation of CELAC as a regional forum for dialogue and political coordination and as an international political actor is one of our priorities. In that context, we consider it to be fundamental to continue strengthening regional integration through political dialogue, cooperation and increased trade among the countries of the Caribbean and Latin America. In that regard, we reaffirm the importance of Caribbean countries’ active participation within CELAC and we recognize the role played by successive Chairs of Conference of CARICOM within the CELAC Quartet;

21. Acknowledge and support the effort deployed by CARICOM countries and its Pro Tempore President, alongside Mexico and Uruguay through the Montevideo Mechanism for respectful dialogue in Venezuela, guided by the principles of non-interference and non-intervention in the internal affairs of states, prohibition of the threat and use of force, respect for sovereignty, adherence to the rule of law, respect for the constitutional framework and democracy, and reiterating the right of people to self–determination;

22. Express grave concern over the inclusion of CARICOM Member States in the lists of non-cooperative tax jurisdictions by the European Union which has negative effects on the economies of Small Island and low-lying coastal Developing States which have implemented recognized international norms and have proven their willingness to cooperate and dialogue in order to find solutions;

23. Also express deep concern and rejection of the progressive decline in correspondent banking relations with developing countries, particularly CARICOM Member States, due to de-risking actions by some of the major international banking corporations, which threaten the financial stability of the affected countries and limits their efforts to achieve development and socio-economic growth;

24. Reiterate the call to review and modify the current “graduation” criteria for Official Development Assistance so as to adequately reflect the reality and specific needs of Highly-Indebted Middle Income Countries, particularly Caribbean States;

25. Emphasize the importance of reparation and compensation for the damages caused by slavery in the Caribbean as an act of justice and, in this regard, support the work of the CARICOM Reparations commission;

26. Express our thanks to the Government and People of the Cooperative Republic of Guyana for their warm welcome, hospitality and support in organizing the Sixth CARICOM-Cuba Ministerial Meeting;

Adopted at the Sixth Meeting of Ministers of Foreign Affairs of CARICOM and Cuba on 14th June 2019, in Georgetown, Guyana.