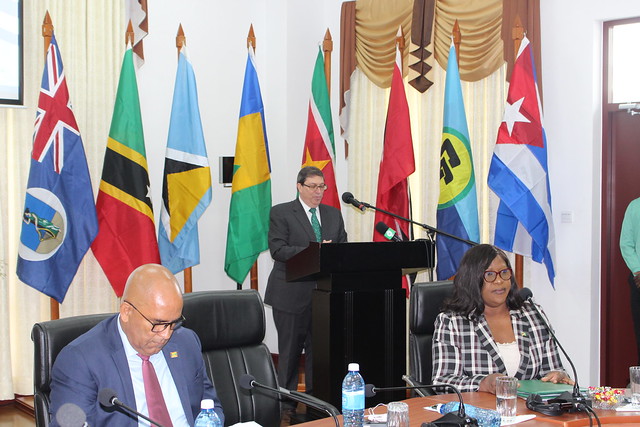 Minister of Foreign Affairs of the Republic of Cuba, Honourable Bruno Rodriguez on Friday 14 June said his country feels it has a “permanent debt of gratitude” to the Caribbean Community (CARICOM) for its historical and fraternal support.

“We recognize your resolute and irrevocable decision to join us in rejecting the genocidal economic, commercial and financial blockade imposed by the United States against our country and the fair claim to put an end to it,” he told CARICOM Foreign Ministers.

Mr Rodriguez was at the time addressing the opening ceremony of the Sixth Meeting of Foreign Ministers of CARICOM and Cuba, in Georgetown, Guyana.

The Minister noted his government’s gratitude for CARICOM’s “firmness” in denouncing the US Government’s authorisation to activate Title III of the Helms-Burton Act. The authorisation paves way for lawsuits in US courts against Cuba’s nationalisation of properties.

Stating that his country’s actions were in “full adherence to national and international laws, as was recognized by the US Supreme Court ruling on the Sabatino case,” Mr Rodriguez added,

“The Helms-Burton Act is arbitrary and is also an outrage and an insult against the sovereignty of Cuba and of third States.”

“There is an attempt to suffocate the Cuban economy and place our people on their knees through scarcities and hardships, but I can assure you that such an attempt will fail.”

Mr Rodriguez affirmed what he described as Cuba’s “permanent commitment to cooperate and share its modest achievement with the Caribbean.”

He said Cuba will never forget the courageous act of Barbados, Guyana, Jamaica and Trinidad and Tobago in establishing diplomatic ties with Cuba in 1972 despite the tensions of the cold war.”

The consistency of formal dialogues between CARICOM and Cuba, like this occasion, he noted, “beyond any question.” exemplifies the strength of their relations.