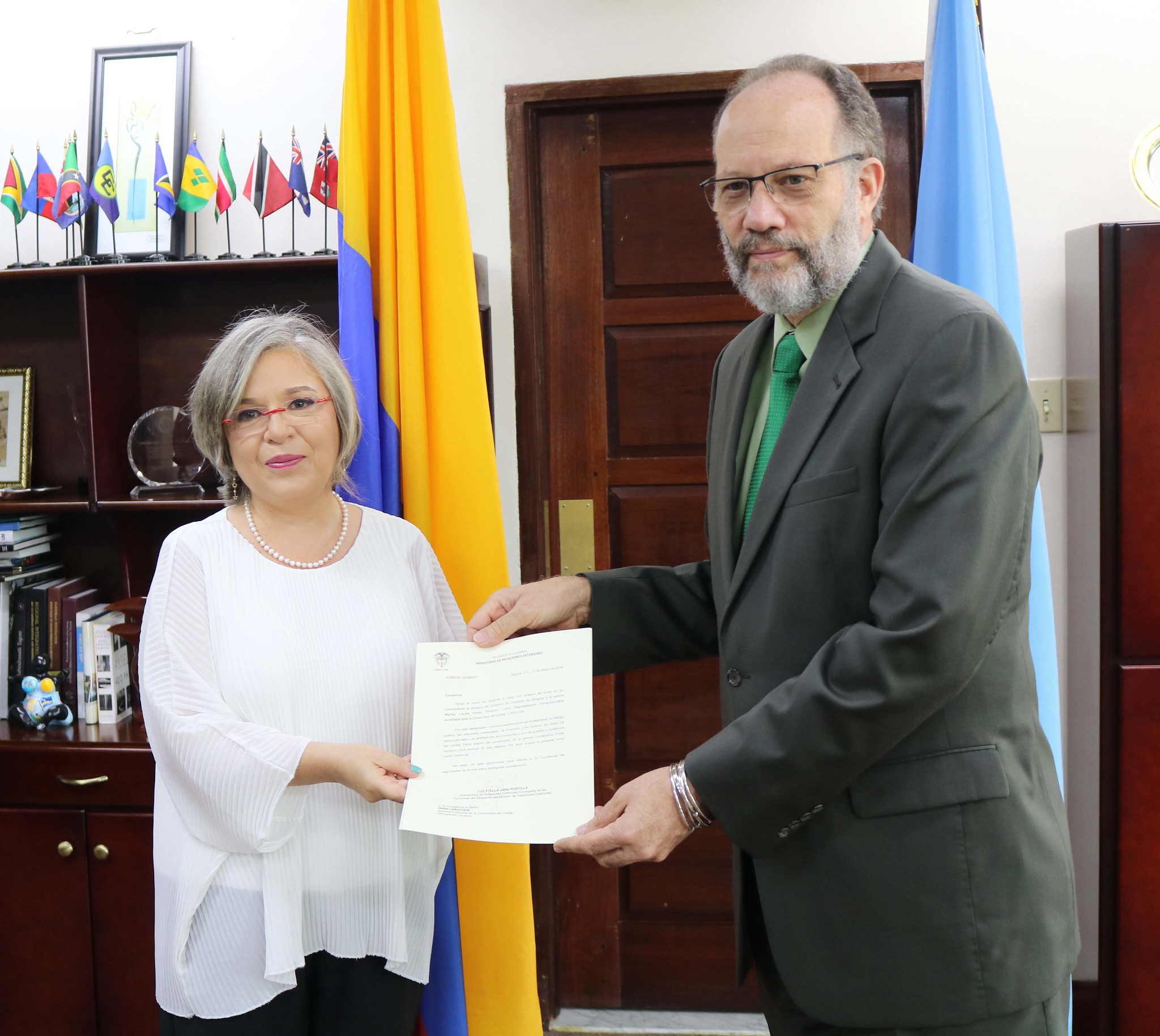 Her Excellency Martha Pinilla, Colombia's Ambassador to the CARICOM presenting her Letters of Accreditation to Ambassador LaRocque, CARICOM Secretary-General

Colombia’s new Ambassador to the Caribbean Community (CARICOM) on Wednesday said her country will make every effort to participate in the Caribbean mega festival of arts: CARIFESTA XIV, scheduled for August 16-25 in Trinidad and Tobago.

Secretary-General, Ambassador Irwin LaRocque extended the invitation to Her Excellency Martha Pinilla, as he received her credentials at the Georgetown, Guyana Headquarters of the CARICOM Secretariat.

Underscoring the importance of people-to-people contact, the Secretary-General said the significant presence of people of CARICOM origin in Colombia, present ideal opportunities to strengthen relations.

In this vein, he told the Ambassador that CARIFESTA XIV is “an excellent opportunity” for Colombia and CARICOM to share their cultural experiences.

Ambassador Pinilla said enhancing diplomatic ties with the Region is a foreign policy priority of President Iván Duque’s government. The presentation of her credentials, she said, is one of several actions in that regard. Other actions include visits to eight CARICOM countries by Colombia’s Foreign Minister, His Excellency Carlos Trujillo, and a bilateral meeting with the Secretary-General.

CARICOM and Colombia are expected to resuscitate high-level political dialogue to discuss cooperation in areas of mutual interests on June 29th, in Cartagena, at the First Meeting of Ministers of Foreign Affairs of CARICOM and Colombia.

Secretary-General LaRocque said his recent discussions with Mr. Trujillo focussed on areas such as trade, technical cooperation, disaster management and security. However, he stressed the importance of reviving trade between CARICOM and Colombia in light of data which revealed that total trade exceeded three billion US dollars as of 2013, but declined to 520 million dollars by 2016.

In this regard, he said the Council for Trade and Economic Development (COTED) has agreed to Colombia’s proposal to host the seventh meeting of the Joint Council - the main implementing mechanism established under the 1994 Agreement on Trade, Economic and Technical Cooperation between CARICOM and Colombia.

Ambassador Pinilla agreed that the Agreement, “is an ideal tool to continue interlacing” CARICOM-Colombia economies.

While the Agreement addresses economic and technical cooperation, the Secretary-General said human resource development, science and technology, research and development, renewable energy, tourism and agricultural development, and migration are other areas of common interest they can explore.

The SG requested Colombia’s support for CARICOM’s advocacy for international policies that allow for a balanced approach in the provision of financial resources to help Small Island Developing States combat climate change and build their resilience.