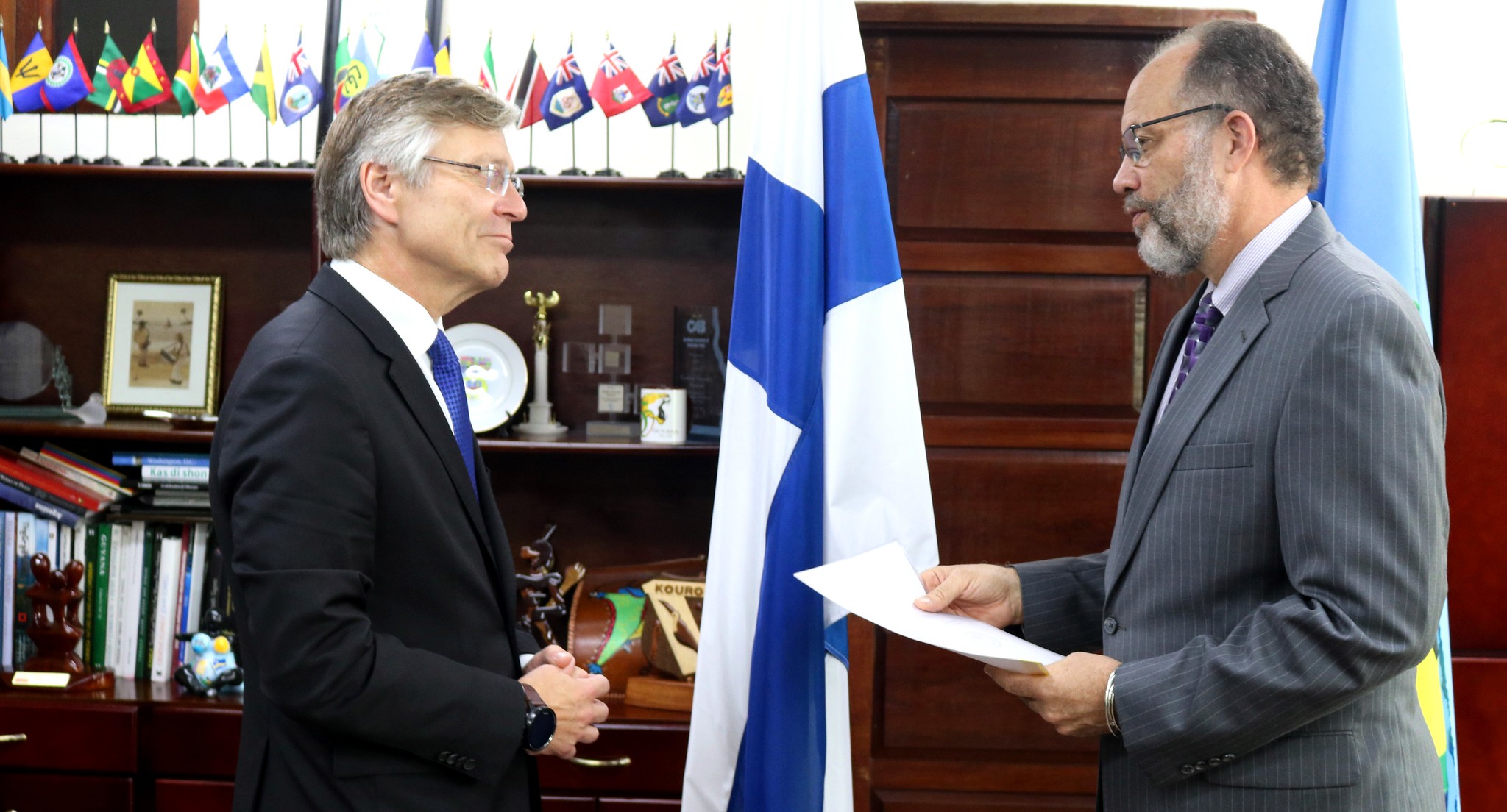 (CARICOM Secretariat, 12 September 2019) The Caribbean Community (CARICOM) has reiterated its call for international financial institutions to accept that the vulnerability of Small Island and low-lying coastal Developing States (SIDS), should be the main criterion for eligibility for concessional development financing, instead of GDP per capita.

As yet another CARICOM Member State reels from an extreme climate-related disaster, Secretary-General Ambassador Irwin LaRocque has lamented –

“How can a country such as The Bahamas, having suffered more than one Billion US Dollars in damages from natural disasters in five years, not be eligible?

He was speaking earlier  today at the Headquarters of the CARICOM Secretariat in Georgetown, Guyana, in a ceremony to accredit a new Ambassador of Finland to CARICOM, His Excellency Pertti Ikonen.

Ambassador LaRocque said studies support the view that for every dollar spent in resilience building, seven is saved in reconstruction and rebuilding costs.

“It is why we are advocating strongly for SIDS, such as our Member States, to access the necessary financing, prior to the onset of disasters, to enable us to become more resilient,” he stated.

He said the first-hand look he got of the damage wrought by Hurricane Dorian was “heart-rending. “

The loss of life, the catastrophic obliteration of homes, businesses and infrastructure, are on an almost unimaginable scale,” he added.

Calling for greater action by larger emitters of greenhouse gases, the main factor in global temperature rise that causes climate change, he said:

“The physical, psychological, and economic trauma the people of the Caribbean face annually, as a result of climate-related disasters, is unlike any other Region in the world.  As small emitters, we are the least culpable in actions which encourage climate change, and yet, we are its perpetual victims.  It is more than time for meaningful action.”

He said CARICOM looks forward to the continued support of Finland and its Nordic counterparts in this battle, at such fora as the United Nations Climate Action Summit on 23 September in New York, and the Conference of Parties on Climate Change (COP25) in Chile in December.

He also expressed optimism that CARICOM can count on Finland to afford it the opportunity to engage with the European Union’s Economic and Financial Affairs Council (ECOFIN) on the blacklisting of some CARICOM Member States as “high-risk and non-cooperative jurisdictions.” Ambassador LaRocque said the countries in question are not so listed by the Financial Action Task Force, the globally recognised regulatory authority.

Finland, a Member of the European Union (EU), has just assumed the Chair. It is also Chair of the EU’s financial, tax governance council, ECOFIN.

The collaboration between the Finnish Meteorological Institute and the Caribbean Meteorological Organisation (CMO) has improved the Region’s capacity to analyse severe weather conditions and communicate early warnings, he said.

The new envoy of Finland said the EU “should be a leading global actor” in combatting climate change, which he described as a “challenging agenda that needs to be analysed together to secure a better future for our children.”

He noted therefore that there is, “plenty of common ground for future cooperation,” as he committed to strengthening relations between the Region and Finland.