CARICOM unwavering in its determination to preserve Guyana’s territorial integrity 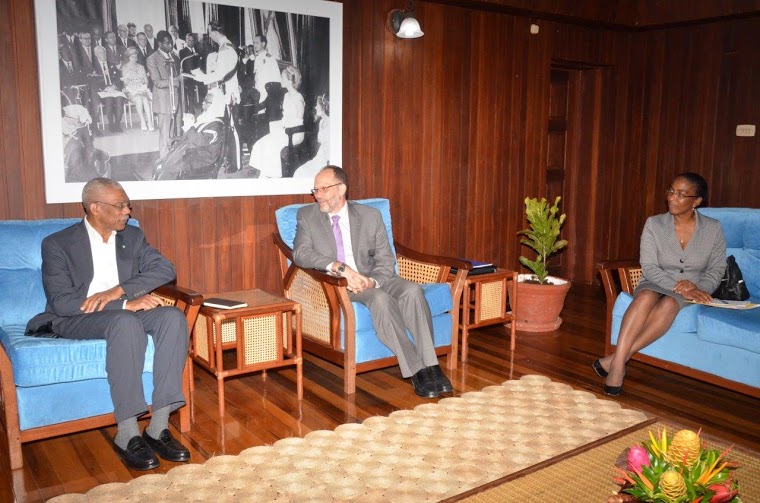 Georgetown, Guyana – (June 2, 2016) Secretary-General of the Caribbean Community (CARICOM) Ambassador Irwin LaRocque on Wednesday said that the Community remained unwavering in its determination to preserve Guyana’s territorial integrity. He gave the commitment when he met with President David Granger at the Ministry of the Presidency.

The community has been resolute in always preserving the territorial integrity of Guyana. It is an issue that we are always on. At appropriate junctures, statements have always been issued. I have made statements, the Community has made statements, the Chairman, at the appropriate occasion, and the matter of Guyana’s territorial integrity is sacrosanct. The Community will always be supporting Guyana in this issue. There is no question about it. It is an issue, which will, of course, be discussed in the next few weeks when the Heads are here, but in terms of Guyana, there can be no question in terms of the Community’s support to Guyana,” Ambassador LaRocque said, in an invited comment.

Ambassador LaRocque met with President Granger to discuss the status of the preparations and the agenda for the upcoming Heads of Government Summit, which is being co-hosted by Guyana since Dominica, which holds the current Chairmanship and was scheduled to host, could not assume that responsibility as it is still recovering from the impact of Tropical Storm Erika, which battered that island nation last year.

I was here to brief His Excellency the President on the preparations for the upcoming Heads of Government meeting… As you know Guyana…has graciously consented to host along with the Secretariat because of Dominica’s situation post Tropical Storm Erika…already we have begun to project some of the issues, which will be on the agenda when His Excellency assumes the chair of CARICOM in January,” the Secretary-General said.

Previously, President Granger had identified a number of the areas in which he would like to focus when Guyana assumes Chairmanship in January 2017. Food security, environmental protection and the security and defence of small states, as well as the response to disasters, will be among CARICOM’S priority issues under his stewardship. The CARICOM Single Market Economy (CSME), an integrated development strategy aimed at promoting growth in the member states, will also be addressed in the push for food security

Ambassador LaRocque said that during his meeting with the President, discussions were expanded on those priority areas, “He already has some thoughts which we will work on which are issues pertaining to the green economy, the economy in general and how we could look to cause the CSME to be make more contributions towards job creation [and] the environment. Of course we spoke about geopolitical issues and challenges in our Region and hemisphere and those are some of the issues, which will be on the agenda,” he said.

The Chairmanship of the Conference of Heads of Government is rotated every six months. (Adapted from a Minister of the Presidency Press Release)