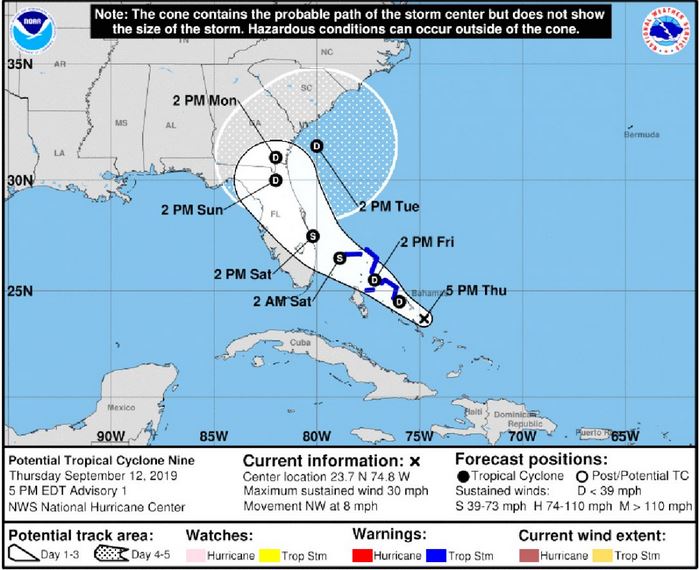 (The Nassau Guardian, 12 September 2019) Abaco, the Berry Islands, Bimini, Eleuthera, Grand Bahama and New Providence are all under a tropical storm warning after it was announced that an area of disturbance in the central Bahamas is expected to develop.

In its 5 p.m. update, the National Hurricane Center said, “The system is expected to move toward the northwest near eight miles per hour (mph), and this motion is forecast to continue during the next two days. On this track, the system is anticipated to move across the northwestern Bahamas on Friday, and along or over the east coast of central Florida on Saturday. Maximum sustained winds are near 30 mph with higher gusts. The disturbance is forecast to become tropical depression or a tropical storm during the next day or so.”

Chief Meteorological Officer Arnold King said in a press conference today that the system could affect areas that were impacted by Hurricane Dorian.

“There’s an area of disturbance over the central and southeast Bahamas, and it’s gradually becoming better organized,” he said.

“Surface pressures are falling in the area. Conditions are becoming favorable for a tropical depression or a tropical storm to form within the next day or so as the system moves through towards the northwest and northwestern Bahamas and towards the Florida peninsula at five to 10 miles per hour.”

He added, “This disturbance will bring heavy rainfall and gusty winds across portions of The Bahamas through Friday, especially portions of the northwestern Bahamas affected by Hurricane Dorian.