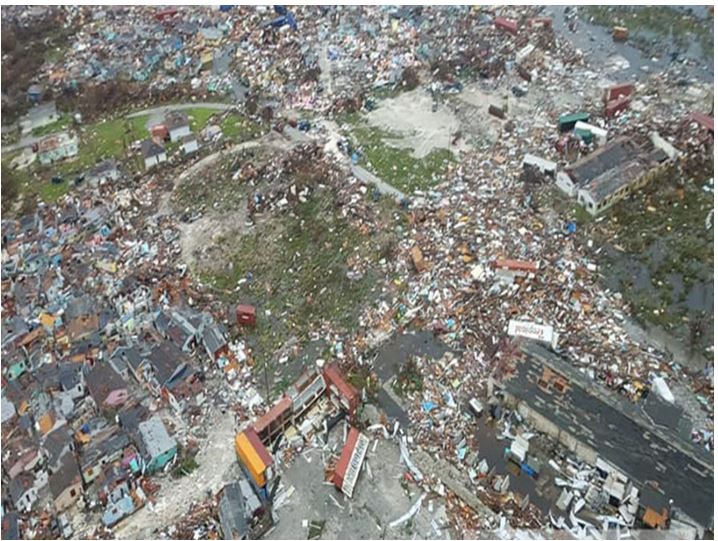 Grand Cayman, Cayman Islands, September 6, 2019.  CCRIF will pay The Bahamas approximately eleven million United States dollars (US$10,936,103) following the passage of Hurricane Dorian that caused widespread devastation in the northern part of the 700-island archipelago. The Bahamas has 3 tropical cyclone policies with CCRIF, each one covering a section or zone of the archipelago – North West, South East and Central. It is the tropical cyclone policy for the North West Zone – which includes the Abaco Islands and Grand Bahama – that was triggered. Dorian made landfall on 1 September and battered the Abaco Islands and Grand Bahama, in the north of the archipelago, for two days.

CCRIF’s payouts are made within 14 days of an event, but in this case CCRIF made an advance payment today of 50 per cent of the payout to allow the Government to begin to address its most pressing needs – with the remaining 50 per cent to be paid within the 14-day window for all CCRIF payouts. CCRIF CEO, Mr. Isaac Anthony, contacted the Government of The Bahamas to inform them of the payout and to express the Facility’s own commiseration for the many lives lost and to pledge support to the Government as it seeks to recover and rebuild not just infrastructure but also lives.  In acknowledging the destruction and damage wrought on the northern islands of The Bahamas, Mr. Anthony expressed some relief that Dorian spared most of the other islands.

This additional support that could be provided by CCRIF to the Government of The Bahamas will come from the Facility’s corporate social responsibility or technical assistance (TA) programme. Over the years CCRIF has provided resources from its TA Programme to governments to support specific projects after a natural disaster. In fact, The Bahamas was the recipient in 2012 of a TA grant of US$85,000 following the passage of Hurricane Sandy for the construction of a new sea wall at Sandyport Beach. Similar sized grants have been provided over the years, to Jamaica (US$100,000 for the rehabilitation of the Muirton Boys Home following Hurricane Sandy in 2012) and Dominica (US$100,000 for the construction of new fencing at the Douglas-Charles Airport, which was damaged by Tropical Storm Erika in 2016) among others. The CCRIF Board and Management will decide on possible TA support to The Bahamas in collaboration with the Government in the coming weeks.

Mr. Anthony reiterated that “member governments are appreciative of this rapid infusion of quick liquidity through CCRIF payouts from its parametric insurance policies, which they are able to use to address immediate priorities and to support the most vulnerable in their population”. He noted that “CCRIF, through the parametric insurance products that it provides, is an example of a disaster risk financing tool that is most applicable for high impact low frequency events; and the instrument is designed to allow member governments to reduce their budget volatility and to provide some amount of financial resources for emergency relief such as restoring critical infrastructure and providing assistance to the affected population, thereby assisting to reduce post-disaster resource deficits”.

These rapid payouts are possible because the insurance policies that CCRIF sells are parametric as opposed to indemnity insurance otherwise referred to as traditional insurance. Parametric insurance products are insurance contracts that make payments based on the intensity of an event (for example, hurricane wind speed, earthquake intensity, volume of rainfall) and the amount of loss calculated in a pre-agreed model caused by these events. Therefore, payouts can be made very quickly after a hazard event, making CCRIF’s parametric insurance different from traditional/indemnity insurance that require an on-the-ground assessment of individual losses after an event before a payment can be made – which can take months for a claim to be settled.

CCRIF encourages member countries to use its parametric insurance policies in conjunction with other disaster risk financing instruments towards building a financial protection strategy that combines a number of instruments that address different layers or types of risk which best balances budgetary conditions with the need to manage the ongoing economic liability which natural disasters present, especially in the face of a changing climate.

Since CCRIF’s inception in 2007, the Facility has made 38 payouts totalling a little over US$139 million to 13 of its 21 member governments. The truth is, “what we do is really about supporting governments to help their populations – communities, businesses and key sectors such as education, agriculture etc. A rough assessment of the beneficiaries of these payouts show that over 2.5 million persons in the Caribbean and Central America have benefitted directly or indirectly from these payouts after a disaster”, said Mr. Anthony.

CCRIF SPC is a segregated portfolio company, owned, operated and registered in the Caribbean. It limits the financial impact of catastrophic hurricanes, earthquakes and excess rainfall events to Caribbean and – since 2015 – Central American governments by quickly providing short-term liquidity when a parametric insurance policy is triggered. It is the world’s first regional fund utilizing parametric insurance, giving member governments the unique opportunity to purchase earthquake, hurricane and excess rainfall catastrophe coverage with lowest-possible pricing. CCRIF was developed under the technical leadership of the World Bank and with a grant from the Government of Japan. It was capitalized through contributions to a Multi-Donor Trust Fund (MDTF) by the Government of Canada, the European Union, the World Bank, the governments of the UK and France, the Caribbean Development Bank and the governments of Ireland and Bermuda, as well as through membership fees paid by participating governments. In 2014, an MDTF was established by the World Bank to support the development of CCRIF SPC’s new products for current and potential members and facilitate the entry for Central American countries and additional Caribbean countries. The MDTF currently channels funds from various donors, including: Canada, through Global Affairs Canada; the United States, through the Department of the Treasury; the European Union, through the European Commission, and Germany, through the Federal Ministry for Economic Cooperation and Development and KfW. In 2017, the Caribbean Development Bank, with resources provided by Mexico, approved a grant to CCRIF SPC to provide enhanced insurance coverage to the Bank’s Borrowing Member Countries and in 2018, the Government of Ireland contributed funds to support CCRIF.