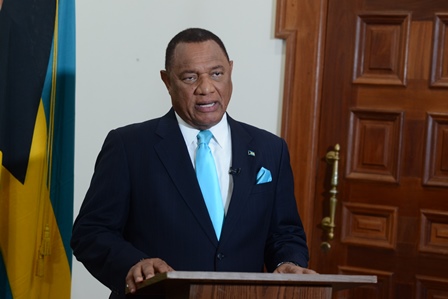 Featured
Prime Minister and Minister of Finance of The Bahamas the Rt. Hon. Perry Christie

Prime Minister and Minister of Finance of The Bahamas the Rt. Hon. Perry Christie heralded the theme that the time is right for Caribbean investment, and that "good news" is on the horizon, with respect to the state of affairs of Caribbean economies.

"This year, there has been more resilience seen in those economies in the region with rebounding tourism, which has been supported by a rejuvenated US economy, lowered fuel prices and an improved investment climate," Prime Minister Christie said during an address at the Caribbean Investment Summit, in London, England, on Wednesday, September 10, 2015.

"The climate is indeed ripe for inward investment in the Caribbean, which has re-doubled its efforts toward implementing energy and fiscal reforms, promotion of investment incentives, strengthening of compliance frameworks and continued redress of social ills in the wake of the global economic crisis."

Prime Minister Christie said he was pleased to be given an opportunity by the Caribbean Export Development Agency (CEDA) and the Caribbean Association of Investment Promotion Agencies (CAIPA) to address the Summit and to be in the "beautiful city of London."

Comparatively, Prime Minister Christie pointed out, the more vulnerable economies of the Caribbean continue to experience slower but steady growth, exhibiting in some countries greater reliance on "inflows of remittances from the diaspora" than on foreign investment to spur economic growth.

"The Caribbean region as a whole provides competitive advantages of accessibility, economic and political stability, adequate labour supply, modern infrastructure, robust investment incentive frameworks and trade facilitation, with some preferential access to markets through its trade agreements with Europe, the United States and Canada," he noted.

"Consequently, there are many opportunities for inward investment, and promotional efforts in this direction are yielding good results," Prime Minister Christie added.

"In fact, foreign investors are now venturing in previously unexplored sectors of our economies: in natural resources, infrastructure, manufacturing, real estate, transport, telecommunications, energy, stem cell research and medical tourism, and as we continue towards development of a single market, such peripheral vision will ultimately reap real rewards over the long-term."

Prime Minister Christie stated that a "substantial" amount of foreign direct investment must continue to build on the traditional sectors such as tourism, financial services, business service outsourcing, fisheries and agro-processing -- where the Caribbean has a competitive advantage.

"We recognize however, that with 60 per cent of our population under the age of 30 and a propensity among our youth for the pursuit of excellence in sports, art, music and cultural endeavours, we must find ways to invest more in the creative industries that can feed into our main economic pillars and develop sustainable linkages across sectors of our economy" he said.

Tourism, Prime Minister Christie said, has been the primary economic driver, but has not matured equitably in the region. This is attributed to the lack of access to SME (Small or Medium Enterprises) financing for development of the needed critical mass of investments in retail business, services, technology and research to cultivate development frameworks, boost consumer demand, and deliver better returns to investors and revenues to Caribbean governments, he added.

"I certainly remain convinced, however, that the tourism sector and its niche industries will continue to be the engine of economic growth, employment, human capital development, industry diversification and business improvement for most of the 40 million citizens of the Caribbean," Prime Minister Christie said.