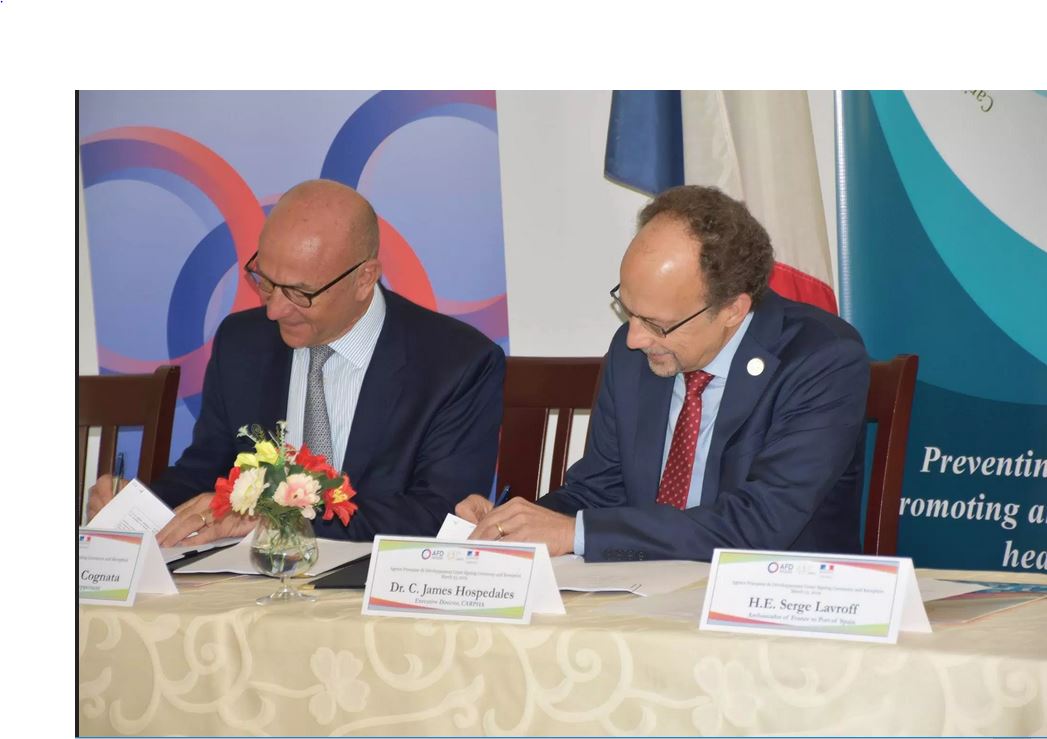 The islands and territories of the Caribbean region, though diverse in language, culture and status, share many public health challenges. These include chronic diseases, ageing populations, and exposure to the effects of climate change such as extreme weather events and outbreaks of mosquito-borne diseases.

The Caribbean Public Health Agency (CARPHA) signed a €1.5 million funding agreement with the Agence Française de Développement (AFD), on Wednesday, 13 February 2019. The agreement aims to strengthen strategic intelligence and partnership approaches to prevent and control non-communicable diseases (NCDs) and strengthen regional health security in the Caribbean, which are beneficial to the peoples of our Region.

The agreement was signed by Dr C. James Hospedales, Executive Director of CARPHA and Mr Philippe La Cognata, Regional Director for Atlantic Ocean of the AFD. This signing ceremony took place at the Embassy of France in Port of Spain.

In his opening remarks His Excellency Serge Lavroff, Ambassador of France to Port of Spain stated that, “The partnership marks the firm commitment of the AFD to our region and the strong will to strengthen the links with it and work more closely with the various cooperation stakeholders. In this regard, health and health issues constitute, in our view, one of the main challenges that the Caribbean must overcome in the coming years and CARPHA is the right stakeholder for us to join forces with.” His Excellency also acknowledged the commitment and quality of work that CARPHA and its teams carry out in the Region.

Speaking at the signing, Mr. Philippe La Cognata said, “The Agence Française de Développement is really proud to sign this financing agreement with CARPHA to strengthen regional health security in the Caribbean.” He further stated, “We consider CARPHA a major player in the region regarding public health issues. For our agency, CARPHA is a quality counterpart and we are looking forward to strengthening our partnership over the years to come.”

The objectives of the agreement include improving the availability and use of NCDs and related population risk factor data, in CARPHA Member States (CMS) and at the regional level. The project has three components: Non-Communicable Diseases (NCDs) which includes the update and implementation of clinical guidelines for hypertension and diabetes. The Regional Health Security component involves communicable disease surveillance, and vector control and surveillance. The third component addresses partnerships, and includes partnership, brokering and negotiation training; and formalise cooperation between CARPHA Member States and the French Caribbean Outermost Regions (FCOR) on data collection and analysis as well as in other fields of cross expertise.

Dr. Hospedales thanked the AFD for their support and stated that “This is a good reflection of solidarity. We are combining the CARPHA umbrella of member states with Martinique, Guadeloupe and French Guiana to have an increased regional health security response to threats, and matters associated with climate and environment, tourism and communicable diseases.” He went on to say, “The regional response to the grave threat posed by non-communicable diseases must be intensified immediately if the health, well-being and development gains of Caribbean people are to be protected. The areas of collaboration are aligned with CARPHA’s strategic priorities such as childhood obesity and other NCDs, communicable diseases and health security and the Caribbean Cooperation in Health.”

In his capacity as Chair of CARPHA Executive Board, the Honourable Terrence Deyalsingh, Minister of Health Trinidad and Tobago, commended the AFD for engaging CARPHA, and by extension by extension the Region, to ensure that global health concerns due to NCDs are addressed. The Minister stated “No one can do it alone. It has to be a team effort. Diseases know absolutely no boundaries and we could only prevent and control diseases through collaborative efforts and agencies like this.” He said “CARPHA already has the UK Overseas Territories (UKOTs) and Dutch as member states, and what this marriage will do is deepen the relationship between CARPHA and the French in the Caribbean, and I hope countries like Martinique, Guadeloupe, French Guiana, will become full-fledged members of CARPHA.”

Attendees at the signing ceremony included senior representatives from the Embassy of France to the OECS; Centre for Health Economics, UWI St. Augustine; Ministry of Foreign and CARICOM Affairs; Ministry of Health; Alliance Française; and CARPHA.