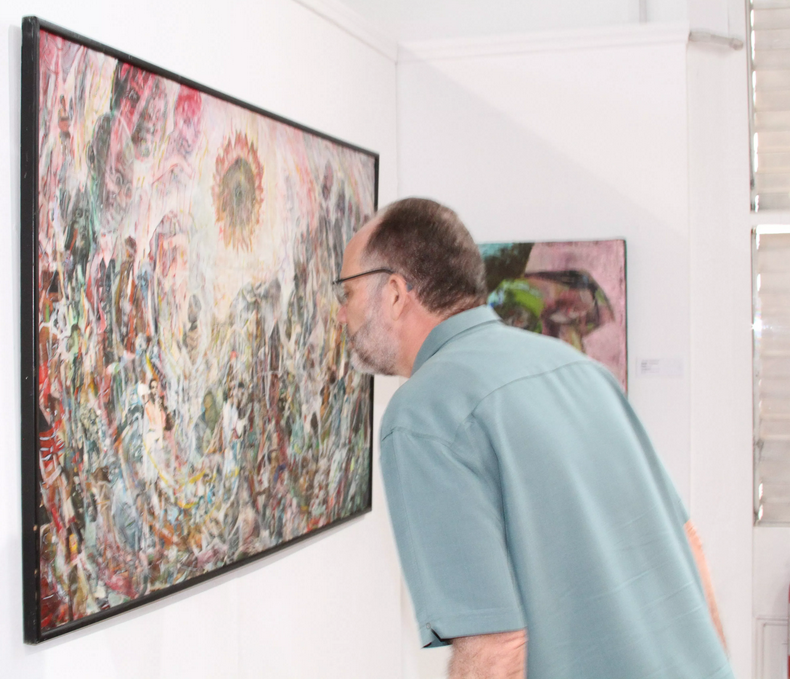 Featured
SG LaRocque seems fascinated with this piece on display at the T&T National Gallery Photos from Rawle Ward and DPI, Guyana

CARICOM Secretary General Ambassador Irwin LaRocque has expressed his delight with the show of regional integration at the fourteenth hosting of CARIFESTA  in Trinidad and Tobago. The Secretary General expressed this sentiment in an interview with our CARICOM One on One host Jascene Dunkley-Malcolm after conducting a tour of the Grand Market.

The Secretary General said he was particularly pleased with the display that was mounted for the CARICOM Secretariat booth and congratulated the team for what he said was a job well done.

The CARICOM Secretariat’s display included information and memorabilia about the Caribbean Community and its institutions as well as a kiddie’s corner with a CARICOM puzzle and a section dedicated to Reparations. See more of the Secretary-General’s comments in the video below.

You can see the full interview with the Secretary-General in a special edition of the CARICOM One on One programme to be aired (on the CARICOM You-Tube channel – https://www.youtube.com/c/caricomorg) later this week.The Secretary General also did a tour of two of the Visual Art exhibits and made a stop at the Youth Village where he interacted with youth from across the Region.

This year over twenty countries are attending the festival. The atmosphere in Port of Spain, especially around the Grand Market at Queen’s Park Savannah has been full of excitement with events happening as scheduled despite the threat of rain.

The main attractions at the Grand Market include a fashion district, and a food court showcasing meals from the host country and other parts of the region. There is also a huge stage where there have been country night performances beginning at 7pm each night. Events are also being hosted at the Queen’s Hall and the National Academy for the Performing Arts (NAPA).

There have also been events in various other parts of Trinidad and Tobago including the South of Trinidad as well as on  Tobago, which has its own fiesta.

One of the early events was held in the indigenous community of Arima, so named after the Amerindian word for water. (See the video below for highlights of that event, where Trinidad and Tobago’s Minister of Community Development and Culture Hon. Nyan Gadsby-Dolly and Guyana’s Minister of Social Cohesion Dr. George Norton were present.)

The ten-day festival will build up to  a grand super concert dubbed “Island Beats” featuring headliners Mr. Boombastic himself  Shaggy from Jamaica and  Machel Montano, Trinidad and Tobago’s home-grown super-star on Saturday August 24. The festival will end on Sunday afternoon with a ceremony that will close the curtains on a truly culturally iconic festival that uniquely facilitates regional integration through social interactions, discussions and performances. CARIFESTA has been held since 1972 when it was first staged in Guyana.