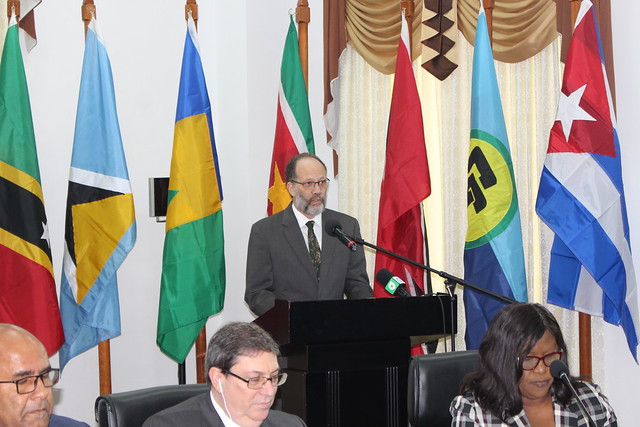 Even as the Caribbean Community (CARICOM) on Friday reaffirmed the great value it attaches to ties with Cuba, it reiterated its call for an immediate and unconditional end to the economic, commercial and financial embargo imposed by the United States on Cuba.

Speaking at the opening of the Sixth Meeting of Foreign Ministers of CARICOM and Cuba on Friday 14 June in Georgetown, Guyana, CARICOM Secretary-General Ambassador Irwin LaRocque said the recent action by the US against Cuba, revived memories of the tension and pressures of the Cold War. He recalled that it was during that time that Barbados, Guyana, Jamaica, and Trinidad and Tobago initiated the “courageous and symbolic act” of forging diplomatic ties with the Spanish-speaking Caribbean Island.

Secretary-General LaRocque stated that CARICOM rejected the “unilateral and extra-territorial nature” of the US’s actions against Cuba.

Chairman of the Council for Foreign and Community Relations (COFCOR), and Grenada’s Foreign Minister, the Hon. Peter David, also strongly condemned the tightening of US sanctions against Cuba.

“…We condemn in the strongest terms this tightening of the unjust US economic, financial and commercial embargo against Cuba. These actions run counter to the strongly-held view that economic development and stability contribute to international peace and security in the Caribbean region just as it does in other regions of the world. These developments in our region have the potential to affect our continuous efforts at sustained development of our countries,” the Minister stated.

He said CARICOM “prizes highly” the links it has built with Cuba over the years through technical cooperation at bilateral and regional levels, trade and economic ties, the mutuality of interests and concerns in regional, hemispheric and international fora, and the fraternal spirit that comes to the fore in times of disaster.

Minister David said the history of CARICOM-Cuba co-operation was marked by Cuba’s generosity, which resulted in the boosting of the Community’s human capital.

“This relation is a fine example of South-South Co-operation,” he stated.

The Meeting is one of the formal mechanisms through which CARICOM and Cuba discuss cooperation in areas of mutual interest. The mechanisms for dialogue also include Cuba-CARICOM summits.