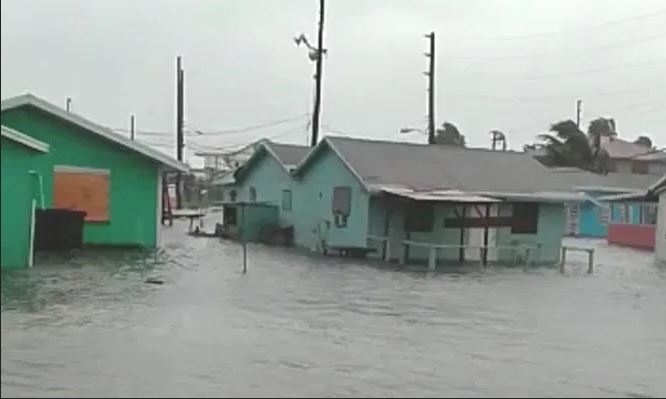 Chairman of the Caribbean Community (CARICOM), Prime Minister Allen Chastanet of Saint Lucia was among the regional leaders who expressed concern and support  to The Bahamas, devastated by category five hurricane Dorian which struck on Sunday 1 September. It left extensive damage across the islands of Abaco and is currently pounding Grand Bahama.

Prime Minister Chastanet, whose island was spared the wrath of Dorian when it made its passage through the Lesser Antilles early last week, wrote on his Facebook page “our thoughts and prayers are with our brothers and sisters in the Bahamas and Florida.”

Earlier Sunday 1 September, The Bahamas’ Prime Minister  The Honourable Dr. Hubert Minnis pleaded with residents on the island of Grand Bahama to leave high risk zones immediately as the hurricane made landfall.

“Grand Bahama, those individuals in the West End area, this is your last warning. We have made all necessary arrangements, at least 13 shelters available. “May God bless us all,” said Minnis, who said that residents of the Abacos who refused voluntary evacuation are in for the “long haul.”

“This is probably the most saddened and worst day of my life to address the Bahamian people. I just want to say as a physician, I’ve been trained to withstand many things but never anything like this. We are facing a hurricane, one that we’ve never seen in the history of the Bahamas. There will be gusts in excess of 200 mph. We have some of the best standards of home-building within this region.

“Our homes are built to withstand at least 150mph so this will put us to the test that we have never confronted before. The extreme surge of about 20ft… that’s higher than the average roof of our homes here in the Bahamas,” he added. In its latest bulleting, the Miami-based National Hurricane Centre (NHC) said that the eye of ‘catastrophic” Hurricane Dorian was over Abacos Islands and “heading with all its fury towards Grand Bahama.

Dominica’s Prime Minister Roosevelt Skerrit on Sunday reiterated a call for developed countries to do more to deal with the impact of climate change as Caribbean Community (CARICOM) governments were expressing their support for the Bahamas.

“My thoughts and prayers are with the government and people of The Bahamas in this time of profound anxiety. I urge all the residents to take heed of the advice of the authorities. This is not a hurricane to take chances with. We shall stand in total solidarity with our dear brothers and sisters should they need our assistance,” Skerrit said in a statement posted on his Facebook page.

“Again, I reiterate the call for the countries of the developed world to take action in relation to climate change. Why can’t the Paris Accord be implemented?,” he added.

Dominica is recovering from the pounding it took from a similar Category 5 hurricane when Maria lashed the island in September 2017, killing at least 30 people and leaving millions of US dollars in damages.

Jamaica’s Prime Minister Andrew Holness, who also took to social media, said that he had been in contact with his Bahamian counterpart, Dr. Hubert Minnis, “and assured him of our prayers and support. “?We stand with the people of the Bahamas in this time of great threat and pledge our support in their time of recovery,’ Holness added.

It has maximum sustained winds of 185 miles per hour (mph) and is moving towards the west near seven mph. “A slower westward motion should continue for the next day or two, followed by a gradual turn toward the northwest. On this track, the core of extremely dangerous Hurricane Dorian will continue to pound Great Abaco today and the move near or over Grand Bahama Island tonight and Monday. The hurricane should move closer to the Florida east coast late Monday through Tuesday night,” the NHC said.

It said Dorian is an extremely “dangerous Category 5 hurricane” and that some fluctuations in intensity are likely. “Dorian is expected to remain a catastrophic hurricane during the next few days,” the NHC said, adding that life-threatening storm surge will raise water levels by as much as 18 to 23 feet above normal tide levels in areas of onshore winds on the Abaco Islands and Grand Bahama Island.

“The combination of a dangerous storm surge and the tide will cause normally dry areas near the coast to be flooded by rising waters moving inland from the shoreline. The water could reach the following heights above ground somewhere in the indicated areas if the peak surge occurs at the time of high tide,” the NHC added.

The Barbados-based Caribbean Disaster Emergency Management Agency (CDEMA) has sent a team to the Bahamas to coordinate the Regional Response Mechanism (RRM). “CDEMA has maintained a high level of readiness in support of all participating states threatened by Hurricane Dorian. We took a decision to pre-deploy in this instance in view of the threat and after consultation with the Bahamas.

“Being on the ground will allow the regional support to be mobilized immediately after the all clear. CDEMA deeply appreciates the support of the government of the United Kingdom to the Regional Response Mechanism.” said CDEMA executive director, Ronald Jackson.

CDEMA said it had deployed two rapid needs assessment teams including representatives of the CDEMA participating states of Antigua and Barbuda, the Turks and Caicos Islands as well as the Caribbean Media Corporation (CMC), the Caribbean Public Health Agency (CARPHA), the Pan American Health Organization (PAHO), Port Managers Association of the Caribbean (PMAC), the United Nations Office for the Coordination of Humanitarian Affairs (UNOCHA), the University of the West Indies (UWI) and the World Food Programme (WFP).

“This deployment is in direct response to a request from the Commonwealth of the Bahamas. The rapid needs assessment teams are expected to support assessments on the family islands most impacted by Dorian in the aftermath of the event. The teams will support the government of the Bahamas in rapidly assessing the damage from the hurricane and in prioritizing needs,’ CDEMA said.