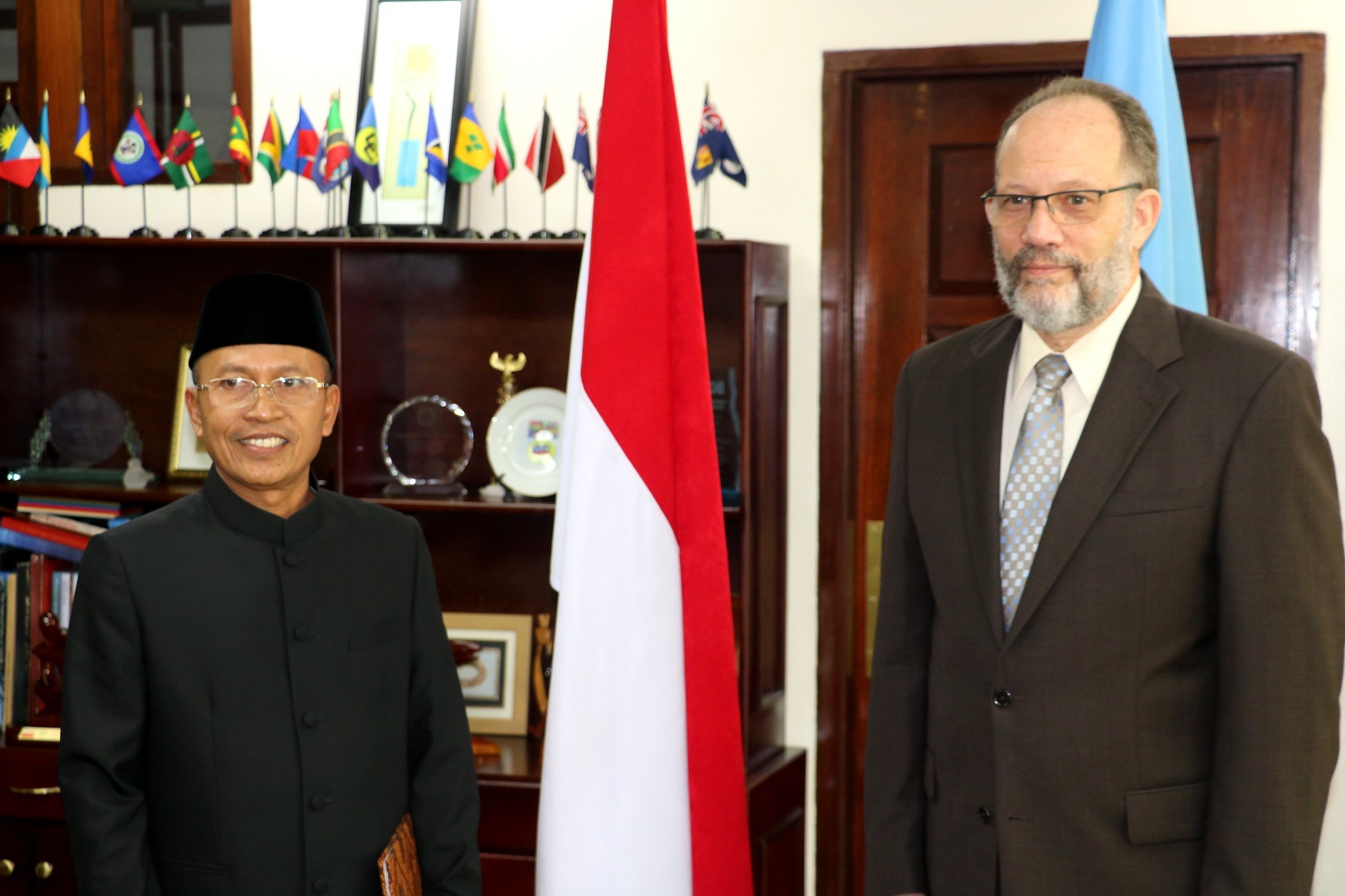 A new chapter in the growing friendship between the Caribbean Community (CARICOM) and Indonesia was opened on Friday 31 May 2019, as CARICOM Secretary-General, Ambassador Irwin LaRocque accredited a new envoy of the Southeast Asian country.

Secretary-General LaRocque accepted the letters of credence of His Excellency Julang Pujianto, in a simple ceremony at the Headquarters of the CARICOM Secretariat in Georgetown, Guyana. The ceremony highlighted opportunities for deeper collaboration in trade, sustainable development, technical assistance, and cooperation in multilateral systems such as the United Nations and the G20.

Secretary-General LaRocque requested Indonesia’s advocacy in the G20 on a range of issues, but in particular on blacklisting, which he said has been causing CARICOM jurisdictions “major reputational damage and disruptive controls” on financial transactions.

The withdrawal of crucial correspondent banking relationships due to the “de-risking” strategies employed by international banks, have had a negative impact on the financial operations of CARICOM economies, the SG told the Indonesia envoy.

Noting that his accreditation was a “valuable opportunity to nurture cooperation between CARICOM and Indonesia,” Mr Pujianto extended an invitation for businesses to participate in Trade Expo Indonesia from 16-20 October in Jakarta. Prior to that event, he said Indonesia’s Foreign Ministry will organise the Indonesia-Latin American and Caribbean (Ina-Latamcar) Business Forum from 13-15 October 2019, in which businesses are also welcomed to participate.

The new envoy said Indonesia has offered no less than 20 programmes for technical assistance and capacity building for the South American and Caribbean regions. 45 participants from eight CARICOM Member States have benefited, but he indicated his government’s desire for this number to increase.

Mr. Pujianto told the Secretary-General of some of the successes of the Association of Southeast Asian Nations (ASEAN) which offers a market worth in excess of US$2.6 trillion. In view of this, he noted that CARICOM and ASEAN have fertile ground to explore cooperation in trade and economic affairs.

Secretary-General LaRocque told Mr. Pujianto that CARICOM viewed links with Indonesia as important. He said CARICOM looked forward to co-operating in international fora on issues such as Financing for Development, Climate Change and the achievement of the Sustainable Development Goals (SDGs), with particular emphasis on the provision of adequate financing for developing countries to attain them.

He added that the Region has been advocating for international policies that allow for a balanced approach in the provision of financing for Small-Island and low-lying coastal Developing States (SIDS) to build economic and environmental resilience.