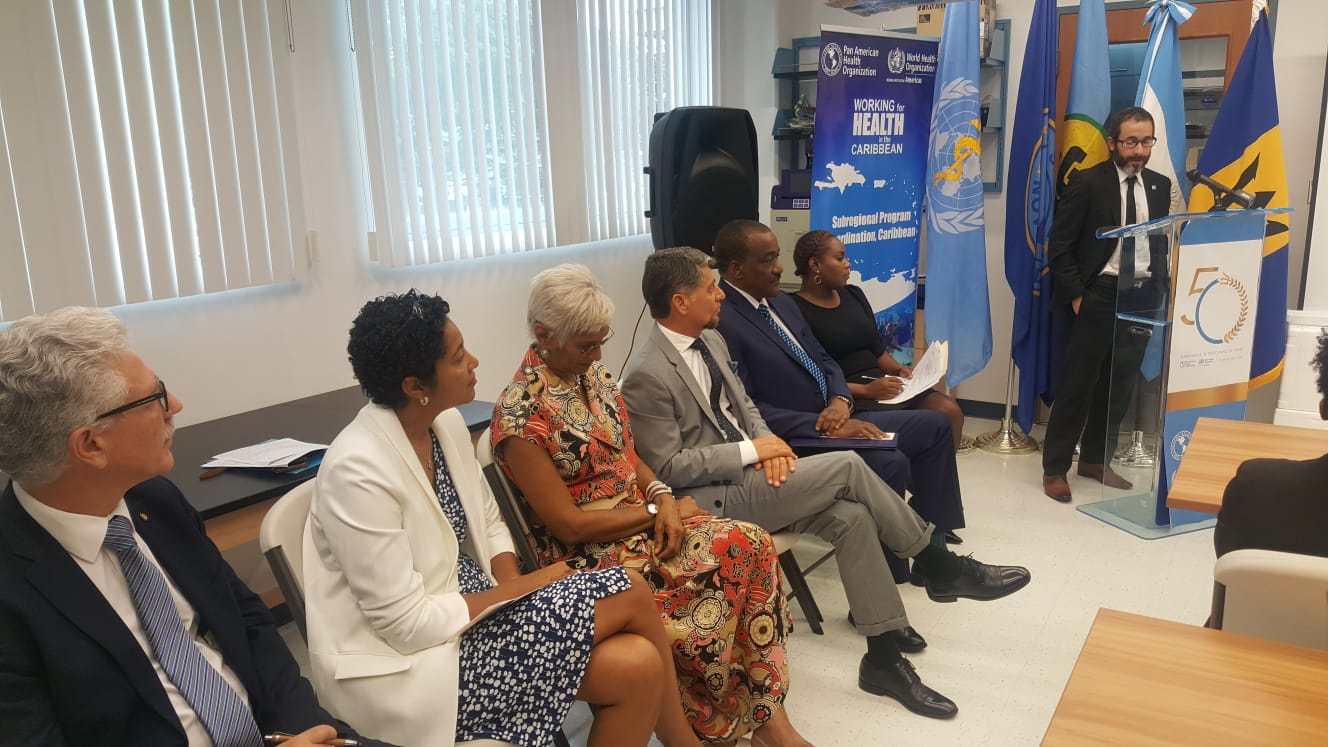 Inter-sectoral collaboration, commitment and action have been touted as crucial to strengthening regional diagnostic capacity to tackle Antimicrobial Resistance (AMR) detection and surveillance in the Caribbean.

This is the objective of a Cooperation among Countries for Health Development (CCHD) project between the Government of Argentina, the Caribbean Community (CARICOM) and the Pan American Health Organisation (PAHO).

At the formal launch of the project at the Best-Dos Santos Laboratory in Barbados, on Friday, July 12, Advisor, Disease Surveillance and Epidemiology, PAHO/WHO Office for the Caribbean Sub-Region, Dr. Eldonna Boisson, revealed that AMR is a threat which has the potential to be more deadly than cancer.

“AMR can kill up to 10 million people a year. A recent survey by the U.K says that it has the potential to cost the world economy as much as US $100 trillion, annually. AMR is not a future threat. It is here. And we need to slow it down now… The problem is that it is increased by the use and abuse of drugs, taking them for too long, taking them when you don’t need them and sharing them with friends and family,” she said.

The two-year project has four objectives: To strengthen lab diagnostics to identify AMR, ensure systems to safeguard the quality of testing, help the Caribbean to analyse data and produce reports, and to use that information to inform prescribing practices and treatment protocols.

The Government of Argentina, through its National Institute of Infectious Disease in the Ministry of Health and the National Food Safety and Quality Services (SENASA), are renowned for their work on AMR. Gustavo Martinez Pandiani, Ambassador of the Argentine Republic to Barbados, noted that his country has been collaborating with PAHO and the World Health Organization on this matter for more than 20 years.

“This South/South collaborative endeavor is in line with my country´s commitment to fostering stronger ties with the Caribbean, where we already have several cooperation projects in place on agriculture, food security, fish waste treatment, honey production, and many others. It is our hope that the AMR project contributes to improving pharmaceutical prescribing and changing consumer practices,” Ambassador Pandiani explained.

In offering his full support to the project and the work of the lab, Barbados’ Minister of Health and Wellness, Lt. Col. Jeffrey Bostic, applauded the partners for their willingness to share their expertise.

“AMR can be likened to a burning fuse connected to a bomb, waiting to explode. We have become so dependent on the availability as needed of effective antibiotics to cover everything from surgery, to child birth, as well as animal husbandry and other food production, that with increasing AMR, we face a number of threats. These include the return to unsafe childbirth, increased illness and death in surgical procedures, re-emerging diseases, such as tuberculosis, threats to food security and food safety, as well as economic losses… and even developmental regression,” Minister Bostic remarked.

Subregional Programme Coordinator of the PAHO Subregional Office, Jessie Schutt-Aine, noted that this was just the beginning.

“I am happy to say that Cooperation among Countries for Health Development has gained renewed importance thanks to strong political backing from countries.” Mrs. Schutt-Aine said.

The consultants will travel to Trinidad and Jamaica for similar missions and later this year, a group of CARICOM lab specialists will visit Argentina for training and mentoring in AMR laboratory diagnostics.

Laboratory Director at the Best-Dos Santos lab, Songee Beckles, placed on record her gratitude for the opportunity for her staff to benefit from the project. She reported that the lab had already scored “very well” in a proficiency test and would be playing a supporting analytical role when the project moves to the OECS islands.

Representing member states, Director General of CARICOM Secretariat’s Office of Trade Negotiations, Ambassador Gail Mathurin, expressed her deep appreciation to the partners and indicated that CARICOM was looking forward to continued collaboration on AMR and ways to continue to mobilise south-south cooperation in the health sector.

AMR happens when microorganisms (such as bacteria, fungi, viruses, and parasites) change when they are exposed to antimicrobial drugs (such as antibiotics, antifungals). Microorganisms that develop AMR are sometimes referred to as “superbugs”.

For more information on AMR visit: