Communiqué Issued at The Conclusion of the Thirty-Fifth Regular Meeting of The Conference of Heads of Government of the Caribbean Community, 1-4 July 2014, Dickenson Bay, Antigua And Barbuda 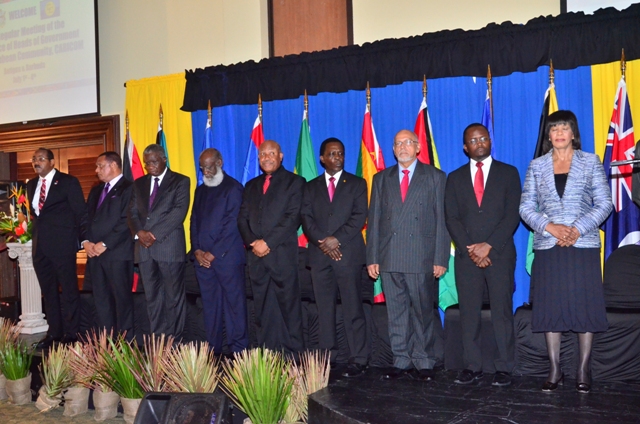 The Thirty-Fifth Regular Meeting of the Conference of Heads of Government of the Caribbean Community (CARICOM) was held at Dickenson Bay, Antigua and Barbuda, from 1-4 July 2014. The Prime Minister of Antigua and Barbuda, the Honourable Gaston Browne, chaired the proceedings.

The Opening Ceremony was held on the afternoon of 1 July at the Sandals Grande Hotel, Dickenson Bay.  It was addressed by: the Chair of the Conference of Heads of Government, the Prime Minister of Antigua and Barbuda, the Honourable Gaston Browne; the immediate past Chair, the Prime Minister of St. Vincent and the Grenadines, Dr. the Honourable Ralph Gonsalves; and Secretary-General of the Caribbean Community, Ambassador Irwin LaRocque.

During the Ceremony, Ms. Marion Bethel of The Bahamas was bestowed with the Eleventh CARICOM Triennial Award for Women.

The official CARICOM Song was played for the first time and the composer, Ms. Michele Henderson of Dominica, received her prize and performed the piece.

Heads of Government paid tribute to the former President of Haiti, His Excellency Leslie Manigat, who passed away just prior to the Meeting of the Conference.

All the statements struck a chord of strengthening the integration process and emphasising that the Community’s strength was in its collective action.

In his address, the Secretary-General alluded to the severe economic conditions being experienced by most Member States but assured that the spirit of unity which prevailed within the Community was ensuring that there would be a collective response.

“It is in recognition of the need to find a regional resolution to the regional problem that our Heads of Government mandated that we prepare a Strategic Plan, which seeks to reposition the Community and which will inform the institutional mechanisms to carry it forward,” the Secretary-General said.

The immediate past Chair gave an overview of his tenure and indicated some of the highlights, emphasising that CARICOM’s accomplishments must not be forgotten as they ‘constitute a part of the permanent landscape of our Region’s political economy.’

Prime Minister Gonsalves outlined some of the main issues to be addressed at the Meeting, placing them in the context of the difficulties with which the people of the Region are contending. He urged understanding of the situation by all and encouraged civil society, including businesses and trade unions, to appreciate the continuing difficulties and act responsibly.

Prime Minister Gonsalves observed that “a concerted regional approach is required to improve our economies, create wealth and jobs, and manage much better our fiscal and debt condition, and strengthen the social safety net for those who are disadvantaged”.

The Chairman in welcoming all to Dickenson Bay, recalled that it was there in 1965, that the leaders of Antigua and Barbuda, Barbados and Guyana signed the CARIFTA accord “that reignited the flame of regional integration from the embers of the West Indies Federation.”

Prime Minister Browne said this was the time to set aside the “illusion of national salvation entirely by national effort.”

“National efforts are crucial in all sectors of our economy and in every aspect of our societies, but such efforts should not discount or disdain regional collaboration,” he added.

The Prime Minister stated his commitment to ensure that his country would do what is necessary to replace the Judicial Committee of the Privy Council of the United Kingdom with the Caribbean Court of Justice as its final court of appeal.

Pr1762014- communique issued at the conclusion of the 35th regular meeting of the conference of heads of government. (351.89 KB)