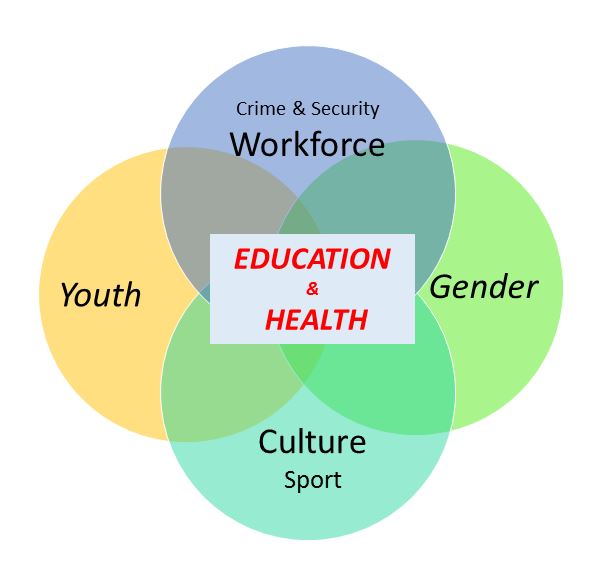 During the Annual Judicial Conference in St Kitts in the week of May 26, 2019, I met with Justice  Mario Michel of the Eastern Caribbean Court of Appeal  and reminisced  about his tenure as Chair of the CARICOM Council of Human and Social Development in 2000 while he was Minister of Education and Culture, St Lucia.  We recalled the daring attempt to pioneer an integrated approach to human development for CARICOM  under the theme ”Investing in Human Capital with equity". That discussion stimulated  this blog and is a tribute to Justice Michel's creative leadership.  It is heartening to note that the CARICOM Secretariat and its partners have revived  this quest through the Human Resource Development Strategy (2018).

The Fourth Meeting of the Council for Human and Social Development (COHSOD) of the Caribbean Community (CARICOM) held  in Georgetown, Guyana on 4 October,  2000,  deliberated on  an  initiative for formulating an  integrated model of social policy under the theme, "Investing in Human Capital with Equity" The diagram shows,  the programme areas  of the Directorate of Human and Social Development  deemed to be central  to Human Capital Development (HCD).  The logic for the integrated HCD model was predicated on the assumption of Education and Health as  core areas; Culture and Labour/workforce as overlapping; gender and youth as complementary; and  Sport, crime and security  as intervening.   The concept  was to project these social policy aspects of functional cooperation in  a multidimensional, measurable approach to HCD. The vision was to represent the integrated implementation of these functional areas as vital to the viability of the CARICOM Single Market and Economy (CSME).  One practical outcome of the HCD initiative was streamlining  the annual work programme of the Directorate of Human and Social Development. Whereas in 2000, there were 54 strategic outcomes among eight programme areas, by  2004,  the realignment according to the inter-sectoral matrix -planning approach adopted, resulted in 12 strategic outputs.

It is  important to note that  there continued to be  a search for a methodology to operationalize the HCD model.  The exercise  was taking place at a time when CARICOM and other regions were steeped in the follow up to  1995  World Summit on Social Development, (WSSD) in Copenhagen,  the largest gathering of Heads of States and governments up to that time, that resolved to put people  at the centre of development. The WSSD was the precursor to the UN Millennium Development Goals (MDGs). Since the eight (8) MDGs established targets that overlapped with the eight  (8) CARICOM HCDs, the latter concept while retained and advocated over the next 5 years, was never fully operationalized. It was superseded by the MDGs to which all CARICOM States became committed .   https://www.un.org/millenniumgoals/news.shtml

At the 32nd CARICOM COHSOD in May,  2018  the Human Capital Development Initiative was revived. The  recommendations  of the  Commission on  Human Resource Development (HRD) were accepted  under the theme,  'Positioning Human Resource as Central to Caribbean Resilience and Development’. It established  strategic priorities for  improving access, relevance, equity and quality. It is intended to be a multi-sectoral-people-centered approach to development, in which human development is at the core of sustainable development.  Ambassador Irwin LaRocque, CARICOM Secretary General  aptly puts it:

By mainstreaming HRD, it becomes possible to realize goals related not only to the areas of human and social development, but critically, to our economic development. The enhancement of our human capital is fundamental to the success of the CARICOM Single Market and Economy (CSME)".

The CARICOM HRD Strategy converges  with the elements of the World Bank's  Human Capital Project. It addresses deficiencies at all levels in the education system aimed at ensuring  that  people of the Region are adequately equipped with 21st century skills and competencies. It is aligned to the CARICOM Strategic Plan aimed at  social, economic, technological and environmental resilience.  Its elements also relate to  targets of the  UN Sustainable Development Goal (SDG) #4, which  promotes “inclusive and equitable quality education and promotes lifelong learning opportunities for all” and  SDG # 8  that promotes  “sustained inclusive and sustainable economic growth, full and productive employment and decent work for all.

These are in fact the essence of the  lessons learned from the World Bank HCP that were the focus of the GOFAD Blog (May 31, 2019) Myrna Bernard , CARICOM  Director of Human and Social  Development , who was a member  of the Commission on HRD (2018) and one of the architects of the HCD (2000) provides a useful summary: https://youtu.be/8SOeoQJbiE8

The CARICOM HRD Initiative,  places emphasis also on early childhood development interventions championed by Guyana's First Lady,  Sandra Granger that promote nurturing care—health, nutrition, responsive caregiving, security and safety, and early learning.  It refers to  empirical evidence showing that early childhood programmes may cost as little as 50 cents per child per year, when combined with existing services such as health. And it is supported by the science and economics that are clearly on the side of investing in the first 1,000 days of a child’s life. The cost of not doing so is higher. Children fall behind long before they set foot in school. [Lancet’s Series, Advancing Early Childhood Development: from Science to Scale].  The HRD initiative  is concerned that in the CARICOM region there is less public provisioning for early childhood education, especially for the 0-2 year age group, as opposed to the pre-school years. The uneven funding distribution across sectors is striking; expenditure on pre-primary as share of government expenditure on education is only 2.9% compared to primary at 34.9% and 40.3% for secondary education.  Research shows that a child’s brain develops faster in the first 2-3 years than at any other time in life.  These are the same attributes that are reflected in the Human Capital Project (see GOFAD blog May 10, 2019. ) https://globalonefrontier.org

Among the  other elements of human capital which CARICOM's HRD actively relates  to,  is

In addition,  the CARICOM  HRD is complemented by a regional accreditation mechanism for   Caribbean Vocational Qualification (CVQ)  and the Technical and Vocational Education and Training  (TVET)  coordinated by Caribbean Association of National Training Agencies (CANTA), designed as an integral part of the common qualification framework,  preparing manpower for development across CARICOM. So far, seven CARICOM countries have fulfilled the stringent technical and other competency criteria  associated with specific occupations:   Jamaica, Trinidad and Tobago, Barbados, St. Lucia, Grenada, Guyana and St Vincent and the Grenadines.

The Caribbean Community Secretariat has over time pioneered several programmes of great significance.  Most of these are classic examples of how small states can perform with distinction by pooling resources. Others like the human capital initiative and the related human resource development strategy  are worthy tools that can transform the Region. The problem remains: moving from concept to reality which in most times is beyond the reach of the technical officers in the CARICOM Secretariat. Solving the implementation deficit is a matter of governance and leadership of member states and of political will at the regional level.