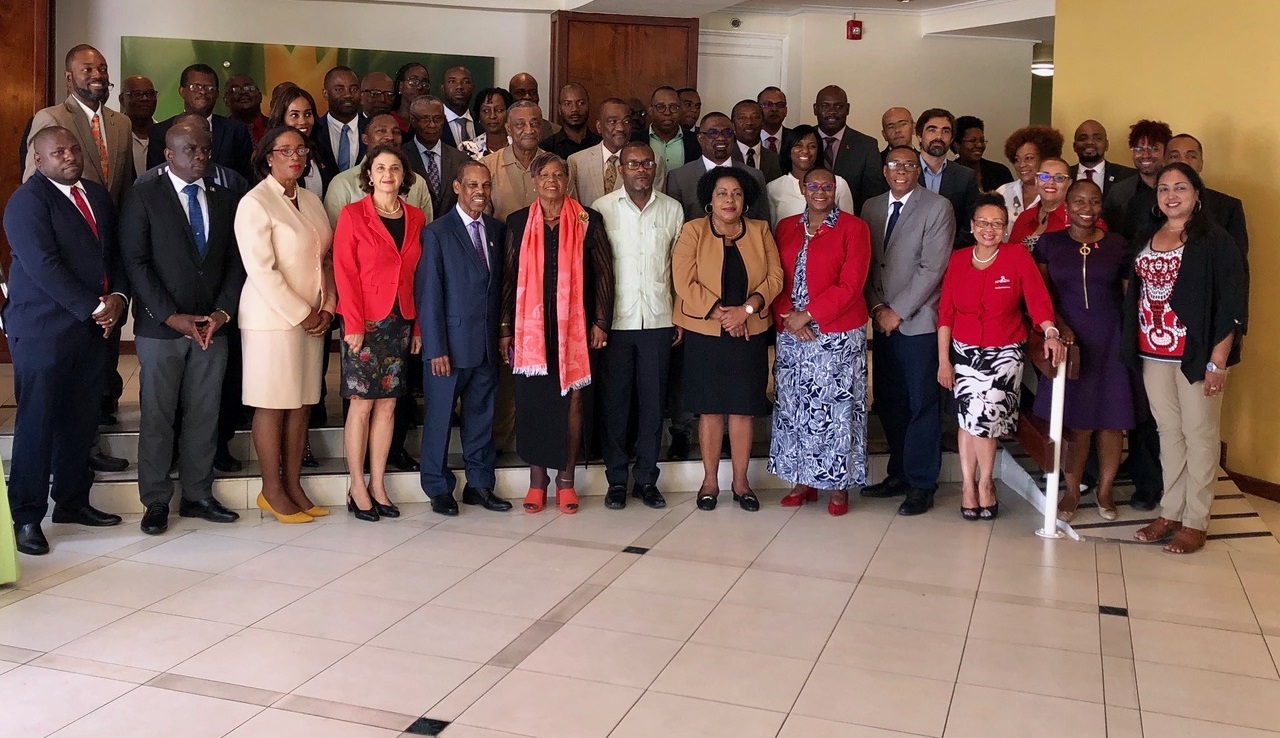 In delivering the Keynote address Hon Cynthia Forde, Minster of People Empowerment and Elder Affairs emphasized that leadership, as well as personal and political courage, were required to deal with the determinants that drive HIV. She reminded the meeting of the political leadership provided by the administration of former Prime Minister Owen Arthur who made HIV a priority by placing it within the Office of the Prime Minister.

Minister Forde challenged all parliamentarians to be involved in a system of governance that is grounded in social protection of all groups. She stated that her Ministry and the National HIV/AIDS Commission takes their mandate seriously and are working assiduously to transform the social landscape for all citizens and to ensure their right to fully participate in all spheres and contribute to social development and evidence-based policy.  The Minister emphasised that no one must be left behind and in this regard, her Ministry has taken its responsibility seriously. “Both government and parliamentarians have never made HIV a political issue but instead have funded a multi-sectoral response including services that are offered free of cost to all,” stated Minister Forde. She also observed that parliamentarians and faith leaders do not fathom the extent of their impact on citizens as they are in a privileged position to work collectively to eliminate the scourge of HIV. She called on all parliamentarians to recommit to an AIDS-free Barbados and Caribbean

Ambassador Daniela Tramacere, Delegation of the European Union to Barbados, the Eastern Caribbean Countries, the OECS and CARICOM/CARIFORUM reminded the meeting that stigma and discrimination are still hampering efforts to reduce new HIV infections, increase the number of persons accessing anti-retroviral treatment and ensure that those who have contracted HIV can live full and productive lives.

“The EU has invested approximately Euros 530,000 in PANCAP over two years from October 2017 to August 2019. We believe that our investment can also have a multiplier effect. Through sessions such as this, the message can be amplified to communities across the nation and the region,”

stated the Ambassador. The EU Representative shared that through increased engagement and coordination, faith-based collaboration with health officials and political leaders can play a pivotal role in reducing the stigma and discrimination associated with HIV and AIDS. “Indeed, HIV/AIDS is not an individual issue but one that touches every part of society and our economy. This is our collective problem, and we need to come together to develop a collective solution,” stated Ambassador Tramacere.

Mr Dereck Springer, Director of PANCAP, provided an overview of PANCAP’s engagements with parliamentarians under its Justice for All programme that seeks to affirm human rights and reduce stigma and discrimination. The Director noted that both the Global Fund to Fight AIDS, Tuberculosis and Malaria and the CARIFORUM 10th European Development Fund are contributing to PANCAP’s work with parliamentarians geared towards creating a more enabling environment for people living with HIV and key population groups. He reminded the meeting of the crucial role that parliamentarians must play in response to HIV and acknowledged that parliamentarians come from families and society and regularly engage with their constituencies thus enabling them to understand the challenges faced by people living with and affected by HIV. He also highlighted the legislative, representational and oversight roles of parliamentarians.

Dr Anton Best, Senior Medical Officer, Ministry of Health, Barbados delivered a presentation that included an overview of the epidemiology of HIV in Barbados as well as the implementation of Treat All and Pre Exposure Prophylaxis (PrEP).

Dr Frank Anthony, PANCAP Consultant, provided a historical perspective of HIV, the advances being made in relation to the science, presented on the key actions required by parliamentarians in relation to their legislative, representational and oversight roles, and facilitated a discussion on key policy and legislative issues that require changes and which are within the control of parliamentarians.

During the plenary discussion led by Dr Frank Anthony, parliamentarians agreed to establish a Joint Parliamentary Committee to identify priorities for action.

PANCAP is a Caribbean regional partnership of governments, regional civil society organisations, regional institutions and organisations, bilateral and multilateral agencies and contributing donor partners which was established on 14 February 2001. PANCAP provides a structured and unified approach to the Caribbean’s response to the HIV epidemic, coordinates the response through the Caribbean Regional Strategic Framework on HIV and AIDS to maximise efficient use of resources and increase impact, mobilises resources and build the capacity of partners.