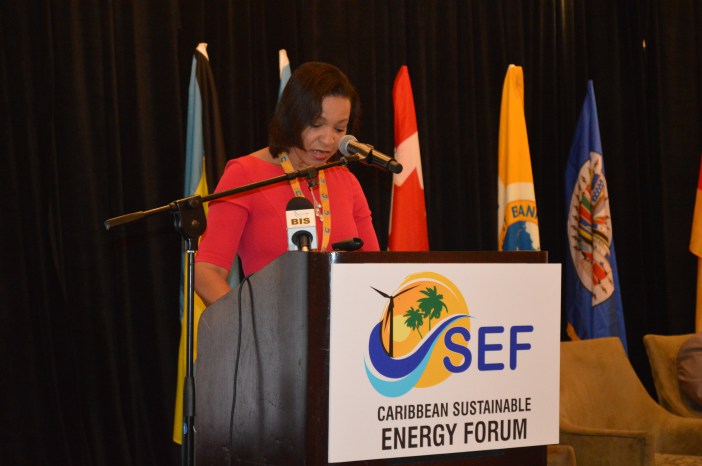 While the dialogue and interaction that engagements such as the Caribbean Sustainable Energy Forum (CSEF) provide are necessary, there is need the creation of a health balance between talk and action.

This was one of the messages Organisation of American States (OAS) representative, Ms. Kim Osborne took to the Fifth CSEF now underway in Nassau, The Bahamas. The Forum officially opened on Monday evening and began panel discussions Tuesday morning.

Delivering remarks at the beginning of the discussions on Tuesday, Ms Osborne praised the partnership and cooperation that produced the CSEF, and underscored the “priceless” linkages that were possible via the Forum.

Of course, there is always the challenge of maintaining a healthy balance between dialogue and implementation. Several studies and reports have noted that our region faces an “implementation deficit.” But I would venture to say that the region also suffers from a “dialogue surplus.” There is a serious mismatch between meetings and results in our region. My point here is two-fold: that dialogue is not an end to itself and that dialogue that does not lead to action and to results is meaningless,” said Ms. Osborne, Executive Secretary, Executive Secretariat for Integral Development, OAS.

Her observations were a point of reference during the day-long panel discussions.

In her remarks, Ms Osborne called for an integrated approach towards the goal of sustainable energy management. She urged the Forum to “expand the lens of analysis and discussion” to include linkages between energy and other critical areas of sustainable development.

In the normal course of things, energy is not provided in a vacuum. It impacts and is impacted by several factors, such as poverty, water availability, disaster risk, climate change, health, education and human resource development, human rights, and coastal and marine management,” she pointed out.

CSEF was established as a biennial sustainable energy event in the Caribbean Community (CARICOM). It is a CARICOM Secretariat event which is organised in collaboration with the Government of The Bahamas. Support for the staging of the Forum is being provided by: the US Government, through the Organisation of American States (OAS); the German Ministry of Economic Cooperation and Development (BMZ), through the Deutsche Gesellschaft für Internationale Zusammenarbeit (GIZ) executed Renewable Energy and Energy Efficiency Technical Assistance (REETA) Programme; the CDB, through the Canadian Support to the Energy Sector in the Caribbean Fund; the IDB; and the World Bank through the SIDS DOCK Support Programme.

The Forum is intended to facilitate dialogue and actions towards the adoption of more robust policies and the transfer of appropriate technologies in renewable energy and energy efficiency in CARICOM. It seeks ultimately to enhance stakeholder support and contribution to diversification of the regional energy supply from its current fossil fuels base to a mix that includes significant renewable sources.

We must do more – PM Christie on reducing cost of energy