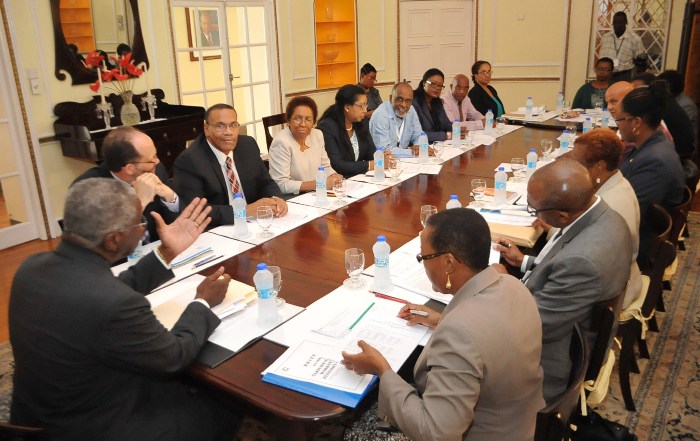 Featured
Prime Minister Freundel Stuart making a point during a meeting with CARICOM and Government officials at Ilaro Court recently. (Photo by A.Miller via BGIS)

Prime Minister Freundel Stuart believes the time has come to have “full and frank discussions” on the CARICOM Single Market and Economy (CSME).

Mr. Stuart, who is the Lead CARICOM Head with Responsibility for CSME, expressed this view recently during a meeting with several CARICOM officials, led by Secretary-General, Irwin LaRocque, at Ilaro Court.

The Prime Minister said: “We have to look at what we have achieved; what remains to be achieved; what are the existing enabling features that can assist us in achieving; and what are the disabling features that can stand in the way. We have to see where our strengths, weaknesses and opportunities are, and be prepared to deal with any threats to the achievement of our objectives.”

The two-and-half-hour meeting was held to update Mr. Stuart on the status of the implementation of the CSME, as CARICOM Heads prepare for discussions on the CSME at the 28th Intersessional Meeting in Guyana next month.

Prime Minister Stuart stressed that the CSME was a journey on which the Caribbean Governments had embarked. “This will never be a destination where at some stage one can say that the labourer’s task is over. We tend to accentuate what has not happened when a lot has happened. I think we have made significant progress on the CARICOM Single Market and Economy.

Mr. Stuart noted that a lot of work had already been done and that this Region was more closely integrated today than at any other time of its history.

He stressed that Barbados was committed to the CSME and gave the assurance that all would be done to realise its aspirational aspects. “From its pursuit and realisation, we cannot afford to retreat. Barbados believes the pursuit of this ideal can benefit the Region,” he said.

Mr. LaRocque said there was a lot happening regarding the CSME and agreed that several achievements had been registered. He stressed, however, that there was more work to be done and agreed that the time had come for the CARICOM Secretariat to do a thorough examination of the CSME. (Barbados Government Information Service Press Release)

Barbados gets ready for CARIFESTA